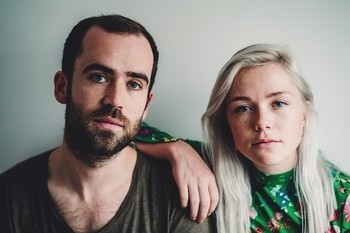 Moon Panda, the moniker under which Californian songwriter Maddy Myers and Danish guitarist Gustav Moltke collaborate – have announced a brand new single ‘Gun’ to follow their critically acclaimed debut track ‘Rabbit’ released earlier in the year. ‘Gun’ has been described by KALTBLUT as “deliciously woozy” and will be released tomorrow (Nov 16th) on boutique label My Little Empire Records.

Moon Panda will also be performing live in London at The Lexington, Islington on Friday November 16th supporting Koates and Raffer.

The lyrics on new track, ‘Gun’, outline the darker thoughts within “the capricious human mind”, says Myers. ‘Gun’ was produced by established engineer Tom Biller who has worked on records such as Warpaint’s The Fool and Fiona Apple’s Extraordinary Machine, to Elliott Smith’s From a Basement on a Hill, and Beck’s track Everybody’s Got to Learn Sometime from the OST of Eternal Sunshine of the Spotless Mind.