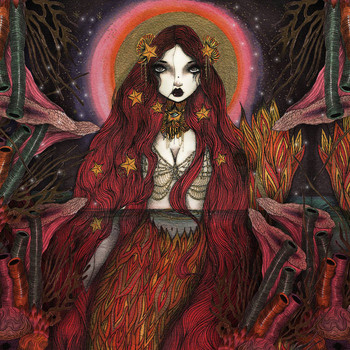 Starla Starshine certainly has a Southern California-centric name. In a region of the country where it’s not uncommon to see maps to the stars’ homes sold right out on the streets, this artist has the word ‘star’ in both her first and last name. Her three-song EP anticipates the December release of Lover Boy, Starshine’s upcoming full-length album.

The EP’s title track is also the release’s most striking track. Beginning with a percussion-less intro, this recording evolves into a throbbing groove. Starshine’s voice is both pained and vulnerable. The voice is a combination of Terri (of Berlin) Nunn’s breathiness, and Ann (of Heart) Wilson’s power. Starshine is attracted to the rebels, those walking contradictions. This release’s title track includes a bridge that finds Starshine announcing, “You look like Jesus/And taste like cigarettes.” This guy is like some kind of Gothic messiah. The backing arrangement features synth sounds in the forefront, and guitar as coloring accompaniment.

Another one called “Bad Boys” (not the theme from Cops), gets straight to the point. “Bad boys take you under their wings/Bad boys make you wanna sin.” She sings it like a girl willingly seeking out her own bad boy. The song’s beat is a swinging, faux-jazz groove. It begins with a finger-snapping opening. One wonders if Starshine, who grew up in Orange County, has a religious past. This song also features Jesus in its lyric. Starshine realizes this is a doomed relationship, however, when she admits, “Bad boys gonna take you down with them.”

“Lover Man” is the work’s brightest and lightest track. It has an 80s sounding musical bed, and it finds Starshine announcing, “You make me wanna love.” This object of her affection has far better character than the man celebrated with “Bad Boys.” Rather than take her down, this guy brings her up and makes her a better person. This song is 80s sounding, in all the best ways. It’s the way pop music was created before EDM put its grubby fingerprints all over the charts. It has a wide-open-with-possibilities vibe about it that makes you feel good. It leaves you thinking positively. Starshine may lust after the bad boys, but when it comes to committing to a man, one gets the impression she wants a guy with better character

Modern pop is a wonderful musical realm, and one more difficult to do well than you might imagine. The best pop music is the variety that matches memorable melodies with an artistic edge. Starla Starshine has mastered this unique artistic juxtaposition with Red Lagoon. She has all the skills necessary to create pop songs, but also the element of artistic mystique. She’s created an irresistible aura that makes the listener want to know about this cool chick’s creations. Although she’s nothing like her, sonically, she’s learned – whether directly or indirectly – from Lady Gaga that in this day and age, one requires more than just enticing sounds to be successful; one also needs a unique image that separates an artist from the rest of the pack. Starshine takes us to the beguiling Red Lagoon and dares us to enter the murky water along with her.