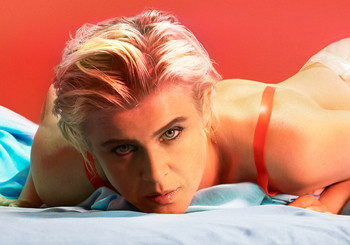 If Robyn’s last album, Body Talk, was dressed up in robots and the mechanical, then Honey is warmer and sweeter, a sensual record about being human that starts from a place of loss and grief, and emerges ecstatically and joyfully into the light. “I danced a lot when I was making it,” says Robyn. “I found a sensuality and a softness that I don’t think I was able to use in the same way before. Everything just became softer.”

Though she has spent the time in between records working almost constantly, curating remixes of her own songs, on side-projects and collaborations with friends, this is the first time she’s back as simply Robyn since she finished the long period of touring that followed the huge international success of Body Talk. By 2014, she began thinking about making a new record, but her confidence wasn’t what it had been. “I wanted to make an album, but I couldn’t,” she says. “I didn’t know how to make an album. I didn’t know what kind of music it was supposed to be. It just felt really pushed and contrived.” She says she wasn’t even sure that she would make another album at all. “I was at a point where I didn’t want to write more sad love songs. I really felt like I was getting tired of my own life,” she laughs. “I’m over this!”