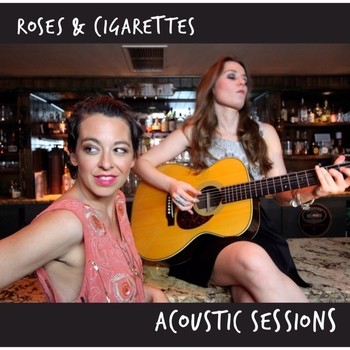 Taking its name from a Ray LaMontagne song, this duo comprised of Jenny Pagliaro and Angela Petrilli has created a compelling six-song EP titled Acoustic Sessions.

An act that comes to mind when listening to Roses and Cigarettes is Heart, which is also a duo (only in their case, siblings), Ann and Nancy Wilson. Like that two, these two rock hard (albeit acoustically) on songs that consistently express (mostly) romantic pain.

There’s also a touch of country influence running through these tracks. This factor is most explicit during “Whiskey Down,” which also tackles a favorite country lyrical topic, booze.

When Roses and Cigarettes call this project “acoustic,” they’re not kidding, as this is just the juxtaposition of acoustic guitar and vocals. The project opens with “Another Way,” a song about the desperation oftentimes found in strained relationships. The acoustic guitar part on this track sounds a bit like Led Zeppelin, stylistically, only not – of course – as accomplished as Jimmy Page.

One of the EP’s more positive songs is “Feel the Fire,” which is driven by sexual tension. “I can’t wait any longer,” they plead, with obvious passion. With “Back to You,” though, this pair sing about romantic betrayal. Even though this lover isn’t a good person, she keeps returning to the bad lover. She doesn’t think this person loves her, but this object of affection is all she wants. There are few things sadder than loving somebody that doesn’t love you.

Another artist comparison is early Melissa Etheridge. Etheridge’s early work was characterized by unbridled passion. She just couldn’t contain herself. Similarly, Roses and Cigarettes have long since given up on trying to appear cool. These songs find them letting all their feelings show, putting it all out there and letting the chips fall where they may.

Lyrically, these songs are just as straightforward as the performances. There is little subtlety. Roses and Cigarettes are not the sort of act that’s going for poetry and words open that are to listener interpretation. Rather, these two create songs that get straight to the point, stay with the point and end with the point.

Roses and Cigarettes live performances must be draining. This honesty takes a lot of effort. You get the sense they’re living out these stories while they’re singing them. They’re not putting on a show; they’re putting their hearts on the line for listeners.

In contrast to so much pop music today, which is little more than artists putting up a front and posing for the camera, so to speak, Roses and Cigarettes do not pose. You get what you see, and what you see (and hear) ain’t always pretty. These songs will sound unusual to many modern ears raised on cooler sonic temperaments. And that’s a good thing. Music should be about expressing feelings in a way that mere conversation can never match.

You may also be drained after listening to this release. It’s powerful stuff, and not meany to be listened to in the background. If you’re a passionate romantic, these songs will be just like your love language. Speak it by singing it loud.