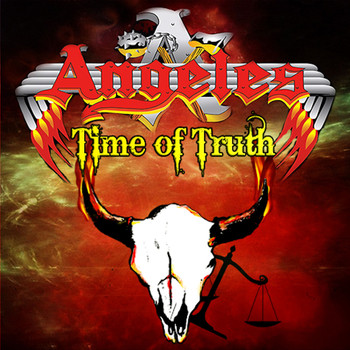 Angeles goes for a wild, rambunctious rock n’roll spirit with “Time of Truth”. Tapping into the colossal riffs of Van Halen and AC/DC, the songs rush forward in brilliant bursts of color. Rhythms have a force of nature quality to them, while they ensure that the whole of the album burns through without delay. By far the highlight of the album comes from the searing intensity of the vocals which have a fully lived-in, joyful quality to them. Lyricism further emphasizes this defiant edge of the album. Purely physicality roars through demanding for the songs to be blasted at the highest possible volume.

Setting the tone for the album is the wild, rambunctious ride of “Pain” which shows off a little of their considerable chops. On “Hollywood” goes for a glamourous style as the song has a luxurious quality to it. Energy pours through the whole of “Trouble”. Things slow down considerably on the introspective take of the meditative “Goodbye” where Angeles reveals a real knack for balladry. A bit of sleaze comes into the fray on the chaotic “We’re No Angels”. The acoustic quality of “Lonely Road” gives it an intimacy. Driving grooves reign supreme on the urgency of “Band Plays On”. By far the highlight of the album “Shiver Me Timbers” proves to be an overwhelming experience, with crazed feral guitar solos and commanding vocals. Bringing the whole of the album to an incredible conclusion is the spacious “God, Country and King”.

“Time of Truth” shows off Angeles’ undeniable swagger while it swings through in a state of such grandeur.