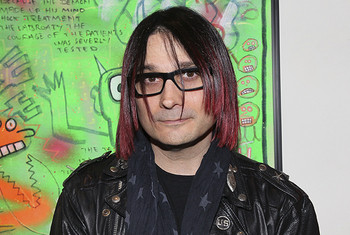 If punk is best understood as outsider music – rock made by non-conformists with attitude – then there’s always been something very punk rock about Dr. Demento. The legendary deejay attracted a devoted audience of misfits, weirdos, and uncooperatives, all of whom tuned in every Sunday night to hear music, gags, and ideas they’d never encounter anywhere else in popular culture. Once heard, a song from the Dr. Demento Show is rarely forgotten. Many members of the Demento audience went on to form punk bands of their own, and the oddball classics they learned on those Sunday nights were scratched so deep into their memories that some of that weirdness was bound to manifest in their music.

John Cafiero is one of those musicians. His band Osaka Popstar has always featured punk rock royalty: he’s worked with members of the Ramones, the Misfits, The Smithereens, The Voidoids, and other legendary bands. But he’s never taken himself too seriously – and counts Dr. Demento within his diverse range of inspirations. Earlier this year, Cafiero produced and conceived of Dr. Demento Covered In Punk released via his own Demented Punk label. It’s a sixty-four track collection of favorites from the Dr.’s iconic radio show reinterpreted and newly recorded by punk/indie/alt-rock rock musicians, plus some demented takes on punk-rock classics included for good measure. The two-hour demented punk extravaganza is also filled with star studded cameos, and between-song anecdotes from Dr. Demento himself.

Cafiero had no difficulty finding famous Dr. Demento devotees to participate in the project. Fred Schneider (of the B52s), Joan Jett, The Misfits, Shonen Knife, The Dead Milkmen, Rasputina, Dr. Demento favorite “Weird Al” Yankovic, and dozens of other talented musicians contributed to the collection. Even William Shatner, Adam West from Batman, and Elvira, Mistress Of The Dark make appearances. And because there are at least as many Dr. Demento fanatics in the music press as there are in bands, the Covered In Punk collection has been showered with accolades. Billboard, Rolling Stone, the LA Times, CNN: they’ve all saluted Cafiero and the project.