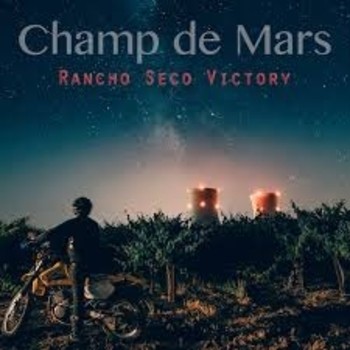 Virginia based Champ de Mars’ first full length release Rancho Seco Victory, literally translated as Dry Ranch Victory, is one of the best alternative rock efforts with a singer/songwriter slant released in recent memory. The project’s first studio release, 2016’s Back from the West EP, actually represented the first chapter in an ongoing musical journey. The evolution towards Champ de Mars began in the late 1990’s with the Northern Californian band Bellstar, a nine year mainstay in the Sacramento/San Francisco music scene. Champ de Mars is, essentially, a reconstituted version of Bellstar with an open door policy encouraging musicians to come and go as they please and pursuing a musical vision all its own. Centered on David Bruns’ songwriting creativity, Bruns is a published novelist as well and a prodigious blogger on the band’s website and his skills bring depth and a literary tenor to the songs lacking in many contemporary acts.

Much of the songwriting has a hazy sound and perhaps one of the more cinematically defined tracks on the album is its opener “Forlorn Cowboys of Nuclear Winter”. The improbable title serves notice alone that David Bruns and his band mate collaborators for this track aren’t interested in satisfying your preconceived notions of what popular music can accomplish. There’s no question Radiohead has a strong pull on their musical imagination, but Bruns is a far better singer than Thom Yorke with an aching streak coloring his voice in nearly every cut. “This Machine Kills Fascists” is one of the band’s more overt stabs at songs with a social conscience of some kind, but Bruns and company never write or perform literal political songs but, instead, artful invocations and reflections on our world today. It, likewise, introduces a much rougher sound for the band that’s closer to outright guitar rock without ever coming off like a cliché.

Their penchant for dissonant textures mixes with the straight forward rock leanings of Champ de Mars during the song “Where Do All the Freaks Hang Out These Days?” It may sound like a rather unwieldy title, but this crying out for solidarity with other beautiful oddballs has an uniquely layered, trippy sound during the chorus. It’s one of the best songs on Rancho Seco Victory. “Brothers” has a handful of interesting tempo shifts, primarily clustered during the song’s second half, but the bulk of the tune finds its mark as a forceful, yet moderately paced, indie alternative rocker. Acoustic guitar makes a memorable appearance in the song “Russian River Roulette”, but it isn’t your customary folky sound singer/songwriter track. Instead, a strong drumming pulse cuts against the acoustic jangle and the band’s typical array of post production effects gives the song a taste all its own. Champ de Mars close Rancho Seco Victory with the tight lines and atmospheric arrangement powering “Nite, Nite Frances” and it’s a powerful final curtain for an album defying virtually every expectation you could have come with into hearing this album. This is a release for anyone who appreciates songwriting with emotional depth and cutting intelligence.