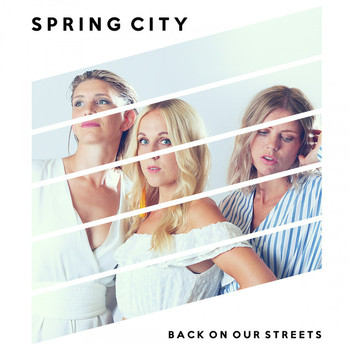 This song captured my heart with a single listen. Further airings only solidified my view as I developed even more and more appreciation for the sure-handed way Spring City builds “Back on Our Streets” without ever lapsing into hamfisted theatrics. It is clear from the first that Spring City’s original songwriting and exceptional musicianship are keys to the song’s success and they likewise have superb instincts for length – the single comes close to four minutes long, but it never seems that long. Instead, the song begins at a mid tempo pace and soon breezes past listeners while still sinking its teeth deep into the songwriting. It’s our likely first taste of what the group’s upcoming first EP will sound like and the enormous realization of talent on display with this song should help the group make a deep impact on the modern scene.

You can’t really call this pop. It’s much closer to singer/songwriter styled material, but there are strong melodic strands in the song that gives it improbable commercial pop. The chorus is incredibly powerful without ever leaving the remainder of the song languishing in shadows and the harmonizing of the group’s three singers sounds live and natural despite a smattering of production effects altering the sound of their voices. A single voice steers listeners through the verses and proves especially effective during the song’s first half, but there’s an equal amount of quality heard in the song’s second half, albeit presented as a more unified effort than we hear during the verses.

The second half, however, makes the song. Spring City slowly puts their figurative foot on the gas pedal and the cut’s tempo intensifies. The guitar work strikes a more chord-based, glittering note than before and the drumming lays down an intensely rhythmic groove without ever overwhelming you. I enjoy the perfectly modulated way Spring City approaches the song’s transitions and there’s never any feeling of them rushing the song towards its conclusion. Instead, everything proceeds along a tempered path and the song’s warm production gives it the best possible shine to help realize its potential.

These aren’t budding talents. The three members at the heart of Spring City have enjoyed substantial success in their homeland and rate as well established recording artists and writers in their own right, but their union as Spring City is something more. It’s a creative unit where the sum is greater than its individual parts and has an unity of sound and purpose that comes across from the first. Rarely does a single sound so confident, so fully realized, and able to stand on its own. “Back on Our Streets” impresses me as a genuine personal musical statement from three singers and writers who are unafraid to put their hearts and talents on the line. It pays off in a big way with this single and we can expect more of the same, if not greater, from Spring City for years, if not decades, to come. You are advised to follow them all the way.

Spring City’s music has been heard all over the world due to the radio plugging services offered by Musik Radio Promotions. Learn more – https://musikandfilm.com/