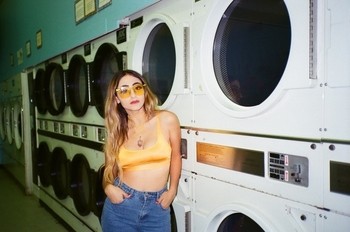 Los Angeles based Disco Shrine has reemerged into 2018 with brand new single, “Up In The Air.” The first track in a series of planned releases, ‘Up In The Air’ is available on all platforms on January 26th.

“This song is about my parents immigrating to America from Iran after escaping the Iranian revolution in the 70’s. “Up in the air” paints a picture of them literally up in the air on their plane ride over to America, leaving the past behind and looking towards their new future. It’s also symbolic of their whole lives suddenly being up in the air, uncertain, and not knowing what to expect at all. It’s more so in my mothers perspective and the strength she had to leave her whole life behind to bring a better life for her children and family. ” – Jessica Delijani (Disco Shrine)

Jessica Delijani is the LA based, pop spark plug behind Disco Shrine. True to her tongue-in-cheek moniker, Disco Shrine makes music that plays around with the contrast between high energy electronic beats and sensual melodies. By embodying the mission of empowerment, Disco Shrinethrives off of being an outlet for listeners to be carefree, accepted, and liberated through dance music.

Born in the San Fernando Valley, Delijani is a first generation Persian-American who grew up to her family hosting traditional Persian jam sessions. Spurred by her desire to join in on the party, Jessica taught herself guitar and banjo at the age of 16 and started writing/performing folk music.