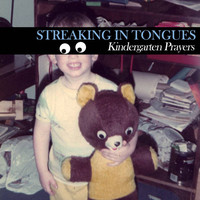 Notes tumble out of the stereo speaker like cascading teardrops on a clear piece of glass. The reverberation is so hollow, and the music is trying to fill up the empty spaces one ominous chord at a time. Kindergarten Prayers is surreal, but that’s something that anyone who knows Streaking in Tongues has come to expect in their music. Equally comprised of folky harmonies and haunting melodies that willfully dance with the most abstract rhythms in pop, Kindergarten Prayers is sublimely postmodern and one of the finest examples of eclecticism in indie rock that I’ve heard in the last few years. Outsider music has never been stylized into a commercial format, and although the genre and its bravest stewards don’t have the same want for fame and fortune than more mainstream pop artists do, it is in their total lack of ego that the majesty of their music is born. Streaking in Tongues is a band that isn’t for the careless music fan, but instead for the music enthusiast who can appreciate all of its magnificently elaborate textures.

Streaking in Tongues, which is made up of a father-son duo out of Michigan, have been steadily gaining momentum in the Midwestern American underground for a while now, and their last album Life Support was released two years ago to an overwhelming amount of praise from both critics and fans alike. Kindergarten Prayers is a fantastic follow-up that longtime followers will definitely fall in love with upon a single listen, and I think that this record could also garner them a significant number of new fans as well. This record is a bit more polished and flowing that Life Support, and while it is bursting at the seams with content (containing no less that twenty two brilliant tracks and absolutely zero filler) it progresses from one track to the next at a furious pace and never drags for a second. While I wouldn’t say that Streaking in Tongues is making music for the Katy Perry crowd, but if you’ve got a sonic palate with any sort of depth to it, I have no doubt in my mind that you’re going to find this record to be the stunning piece of work that I, and the majority of my colleagues, found it to be.

In the song “I Was a Fool Before You Were Born,” my personal favorite from Kindergarten Prayers, there’s a moment where singer Ronnie Ferguson’s voice melds completely into the harmonics of his guitar, and for a second it feels like I’m not listening to a man and his guitar but instead to a singular divine force. If I had to sum up the sound of Streaking in Tongues, it would be just that; an ethereal entity, an unstoppable divine force that we don’t have to fully understand to be able to grasp its gravity and importance. I highly recommend that anyone who has a relationship with music, in whatever fashion, giveKindergarten Prayers a spin when they have the chance next. You won’t be disappointed – I know I wasn’t.