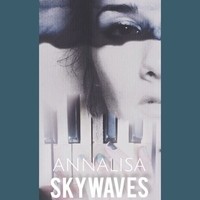 Have you ever been to Arkansas before?  If the answer to the question is a simple “No,” then some kind of way, it would be a true adventure to witness some amazing views in the Midwest portion of the United States.  A state where the 42nd President of United States of America hails from, Arkansas has some amazing accomplishments in her own history including the fact that Johnny Cash was born in Kingsland, Arkansas or the fact that the most common store seen worldwide, Wal-Mart, was founded in Bentonville, Arkansas by Sam Walton.  Although these are wonderful facts about the 25th State of the United States of America, the most important fact is the fact that there is an amazing talent from Arkansas named Annalisa who has just released the ever magical single, ‘Skywaves.’

Annalisa, a native of Arkansas is a girl on a mission to be heard!  With an amazing talent as a pianist, at first, listen various artists come to mind like Sarah McLachlan, Natalie Imbruglia, Sixpence None the Richer’s lead singer, Leigh Anne Bingham Nash, and British Singer-Songwriter Tender Central all come to mind when listening to the beautiful but richly imaginative song, ‘Skywaves.’ But the richness of Annalisa’s tone is not the only sparkling thing as the music begins to play.  The first observation is where has she been?

From the first moment that the beautiful song fills the ears, there is a story being told.  Anyone that invests the effort to present expensive music (Music that includes string ensembles, horns, etc.) is leaving the world with a classic to be remembered by.  The very big power ballad causes the initial thought process as the lyrics start to sink in after the melody begins but a deeper meaning is embedded in those powerful words.  From a spiritual moment, there seems to be a connection between the spiritual world as the opening lyrics state,” Raising up my baby…Taking up all weight…It’s all I know to do…Could you take me by the hand? Lead me to the waves in the sky…” Connecting to a spirit is something visually being done within this beautiful song as in today’s times, that is exactly what believers are trying to ask for.  The next enjoyable discovery is the fact that there is a rich innocence in the drifting melodies and the even more spectacular thing is that Annalisa has a great promotional video to showcase her message.  As a fellow pianist, I paid even more attention to the detail of the song.  Quality…Quality…Quality as the opening chords are mellow, direct, and played with skill.  It is a very heavy powerful song that takes away stress while also allows for entertainment.

Whether it is a live performance or just to stick your head thru the door at anyplace that Annalisa is performing, thought-provoking music, along with challenging melodious sounds will definitely fill the air.  A veteran performer on many stages, it is truly worth it to go and listen to ‘Skywaves’ as there is a true message in every word spoken.  Aim for the sky, leave all troubles behind, but challenge yourself to live every day like it is your last!  Annalisa has something beautiful and it is worth the wait!  THIS song is magical and comes highly rated! Go check it out!