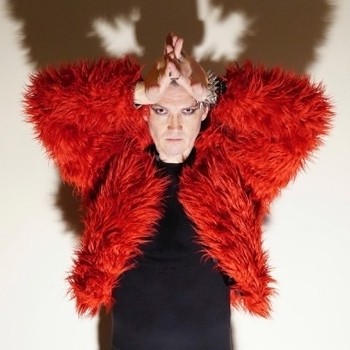 “People with big smiles peddling bad sh*t, waving a lot of flags and banners … something dark and death-like in the disco,” describes Raymond Watts of post-rock band <PIG> not only about his new single “That’s The Way (I Like It)” (a cover of the disco 70s hit by KC & the Sunshine Band) but also of the current state of the world. “Under the seemingly glitzy, ‘good time’ vibes, it seemed to resonate with what’s going on around us at the moment.”

Set for release on August 31, 2018 via Metropolis Records, “That’s The Way (I Like It)” is a seemingly unlikely collaboration with author/DJ/singer/actress Sasha Grey. “Sasha is a total joy to work with,” he says. “She’s has an intuitive understanding, a great sense of humour and great delivery. She completely got the idea of the song working as duet and it is a true <PIG> / Sasha Grey collaboration.”

While “That’s the Way” has been covered by other artists as musically diverse as Dead or Alive, Giorgio Moroder and Spin Doctors (!!!), <PIG>’s version follows a different path… a darker and sinister one. “Bless them all but the <PIG> version is definitive … enough said ?… and they don’t have Sasha Grey,” he laughs. “The song was never really in my orbit although I was aware of it,” he explains. “I was kicking around ideas for potential covers for <PIG> and my girlfriend suggested this song. I took a listen and heard the lyric in a way that wasn’t smutty or titillatingly suggestive but much darker and a little bit threatening.”