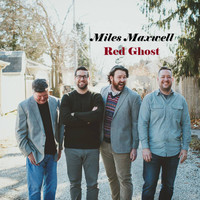 Miles Maxwell is a band without anybody named Miles Maxwell in it. Instead, it’s led by singer/guitarist Miles Baltrusaitis (there’s your ‘Miles’), and its album Red Ghost is a collection of quality Americana rock.

The four-piece band sings about everyday life, with a straightforward, simple style. For instance, “Something New” speaks about technology; not the technology itself, but the people that apply it. “Something New” is also a down home country track, with plenty of twangy electric guitar. “I Can’t Be Myself” is a pretty – yet awkward – love song. It’s about a man who likes a girl but is afraid of how he might act when he’s around her. It’s as if he’s afraid of what she’ll think, once she sees the real guy.

Although there are few obvious musical influences, the impact of The Band can clearly be heard in the groove that drives “She Says (Whiskey Down at 4am).” It rolls with a slightly funky, yet still laidback vibe.

One of the album’s nicer tracks is “Jenever (in Acquia),” which is a lovely – albeit short at 2:15 – instrumental track. It includes fine guitar interplay. However, one of the album’s most unusual songs is titled “Terrible Song.” It’s not as though seemingly the group is admitting it’s written a bad song. Instead, though, it’s a terrible song because it’s about a break up. The best lines in it, and the best lines of the album arrive when Baltrusaitis sings, “So bad that I’ve been making up words/Like despairable since I lost you.” You know your life is bad when you begin to make up negative words to describe your condition.

The album’s title track is another breakup song. It speaks of how this parting has left a trail of victims. The woman in this man’s life has departed, only to leave a red ghost. It’s a man haunted by the girl he once loved.

Miles Maxwell makes some quality music together, and the only shortcoming at times is Baltrusaitis’s vocals, which sometimes lack the confidence to emphatically sell his songs. He sounds a little hesitant at times, when he should sing out with much more authority. This is the one factor that prevents Red Ghost from being a truly great album. It’s a shame because these lyrics are strong and worth putting in the effort. Let’s hope Miles Maxwell receives a little encouragement when they enter the studio next, and perhaps they will gain a higher profile in the Americana music realm.