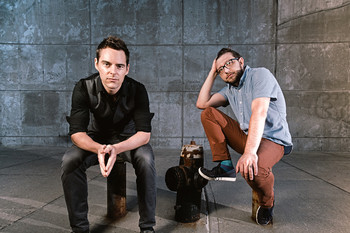 Well here we are, Monday 8 am. I wish it was Saturday but that is besides the point. Anyways we have an amazing band from NYC here by the name Coyote. They and I are excited to share with @skopemag loyal followers and give a listen to the new single ‘Bent.’ So lets kick the Monday blues and get the music on & loud!

Hi COYOTE, welcome to Skope Magazine. How have you been?

Doing well, and thanks for chatting with us! Coming off a couple of shows in the last few days, and feeling energized by the way our set has been evolving the more we can get out and play.

Can you talk to us more about your song Bent?

Bent comes from a tension I seem to feel whenever I set out to accomplish something and there seems to be so many voices / ideas out there that will want me to do it a certain way. I’m highly stubborn and independent and always try to avoid just doing what everyone else does, but somehow throughout whatever process it is, I find myself following things I’ve seen or heard in the past.

Yep, we’re up on Bandcamp, Soundcloud and YouTube, and have a few other tracks there as well. You can get to all of those (as well as our Facebook, Instagram & Twitter feeds) through our site, coyoteband.nyc.

The BPM and backbone riff to Bent comes from the pace my wife and I usually tend to hike at when we’re backpacking. Being in the middle of nowhere at night, with mountains and stars and clouds and crazy rock formations, and trying to make it to a suitable place to camp – there’s a weird mix of exhaustion and excitement at a time like that which has certainly flavored the lyrics and the writing process for Bent as well.

Absolutely. As soon as it seems we’ve got more than just our families and friends following us on social media, and there seems to be a bit of traction in terms of folks coming to shows and engaging with us, we’d love to provide some video content. But right now – hard to justify spending that much money on something only our moms would watch. (laughs) Unless you know anyone who’d be willing to make one for us for free – at least for right now, we’d promise to pay them back if and when things take off.

The track is one of a number of demos you’ve got out right now – any plans for an EP or LP?

We’re working on a lot of new tracks right now, and will write as much as we can between now and November. We’ll get into a studio then, and record everything that’s been fully fleshed out by that point. I’m guessing we’ll be fussy and just pick 5-6 of our favorites, so, if all goes well in the studio, we’d hope to have a finished EP either at the end of 2018 or early 2019.

How is the recording and writing process for you guys?

The writing process – amazing! The recording process – so hard. (laughs) It’s been a ton of fun to write together and work things out behind our instruments, but then working behind a computer to make a recording sound anything close to what we were playing live? Neither of us know enough to really make any of the demos we’ve done so far really do what we want them to do, let alone be radio-ready. While we’re proud of the work we’ve done on the demos we’ve got online right now, it’s akin to the pride a parent has when they put their 3-year-old’s drawings up on the fridge. Really looking forward to working with a sound engineer in a legit studio this fall.

I think AJ’s recently put it best by – when we’re figuring out a track – always asking what that track needs or what’s missing, regardless of genre, or what we’ve done before, or what we think might work. We certainly haven’t strayed too far from a few major genres in what we’ve worked on so far, but balancing between them has always seem to come on a track-by-track basis, rather than thinking “how can this track’s feel or genre balance other tracks we’ve made?”.

No clue. (laughs) I suppose for a song’s rhythm or melody, it can be anything from wrestling with some strong emotion or situation in life, to methodically playing around (is that an oxymoron?) with riffs until I hear something I like. As far as lyrics go, I seem to have no control over when or where they come, though I’ve learn not to expect anything good until the main riff(s) and structure of the track are already there. At that point the song’s always rolling around in my head, and an idea or scene to write about can come at any time.

Yes! But likely not until 2019. We’re still working on building a local and regional following, but are thrilled at the idea of getting out on the road, even if it’s just for some mini-tours to some of the major northeast cities.

What’s one thing we’d be surprised to hear about the members of COYOTE?

I dunno – that we have full-time day jobs, wives and kids? (laughs) I suppose a lot of other bands get traction touring and recording and all that first, and then significant others and families come along. We’re seeing if it’s possible to do the reverse.

It would be unreal to work on something together with Muse – their riffs and lyrics and live performances are so incredibly huge and dynamic. We’d love to be able to write and perform that way someday, and collaborating with them would certainly seem to be a way for us to take a step in that direction. Going back in time, collaborating with Otis Blackwell would be amazing – that guy knew how to write in a way that charged a track with so much life and energy.

They’ve already up and come, but I just can’t think of anyone else right now: Cage The Elephant seem like they’re gonna keep getting bigger and better.

More shows, more tracks, and (eventually) more cities and countries! And hopefully more interviews and social media connections – we really appreciate getting to talk with you, thanks again for having us on Skope!