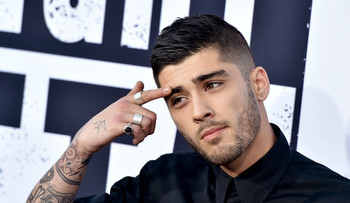 Ever since One Direction happened, Zayn Malik has hooked some of us. Then, when we all thought our hearts were crushed when Zayn made the decision to leave One Direction, he put out some hit singles like “Pillow Talk.” Zayn has since proven that he stands on his own two feet quite well as a solo artist. In his latest release, “Sour Diesel,” Zayn gives us an interesting song with a very groovy flow.

From the drums to the guitar, all of it just sounds funky. It’s not funky in a bad way. It’s funky as in let’s get down on the dance floor and really move kind of funk! We’re going to be breaking up Zayn’s latest release into lyrical content, the production, and our own thoughts on the song.

So, we are opened up to Zayn’s new song with a verse detailing what sounds like a woman walking in somewhere (very Bond-esque). She is described like some super bad spy with the ability to kill anything in her path. Or, so we think. It turns out the name of the song “Sour Diesel” is slang for a strain of cannabis.

From past selfies and drama, we know Zayn is a user of cannabis. So, perhaps the female he is referring to is not so much a female, but more of something along the lines of “hey this weed is really good.”

This is only further supported by the refrain, “She got it and she knows she got it. I’m takin’ off like a rocket. Spaceship so high I can’t stop it.”

It could also be referring to women as he could just be correlating the two: weed makes him feel up and happy and so does this girl in the song.

As mentioned before, the beat is funky. It’s not bad. It gives off that real chill vibe that you would imagine comes along with something corresponding to some marijuana. I totally believe Zayn Malik Hairstyle did this on purpose as the music seems to support the topic of the song very well. The drums are mellow, not as low and in your face as “Pillow Talk” was (the really low-hitting bass). The melody of the song is also a head-flowing experience. I really feel like I’m listening to a song that’s designed for a mellow high. Therefore, the production quality, given we know the meaning of the song, gets an A.

What do we think?

Zayn’s new song “Sour Diesel” is certainly very much relating to cannabis and the good feeling he gets from using the substance. It’s believed that there are some corresponding ideologies in relation to a woman as well. However, this is to be expected from an artist such as Zayn. The song is very well put together, and is certainly going in my “easy-listening” playlist. It gives us a lot more excitement to see the evolving style of Zayn and his music.