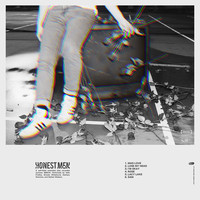 Whenever a band goes into the studio to record anything, whether it be an extended play or a full-blown LP, there are plenty of expectations that are present for both the group and their fans. For one, if there is a rip roar stage reputation to live up to, then artists often face pressure to replicate that sound on multitrack. And if this isn’t their first trip behind the soundboard, then it is anticipated that the latest effort will either match or exceed the previous output, no matter how efficacious or failed that output may have been. Texas’ own Honest Men successfully accomplish both of these goals in their new eponymous, six-song EP, which is a relatively modest recording from a band that has proven they’ve got enough energy to bring the entire house down.

Honest Men features music that, ironically, feels remarkably authentic in its presentation and execution. Organic songwriting is a difficult gem to mine these days, but these four Texas gentlemen seem to have found a winning formula for making nimble, albeit intricate, gusts of pop glory in the six tracks featured here, as well as they did on their previous EP, Okay Dreamer, which debuted in 2016. In a quest steeped in self-discovery and learning to value the inner strengths often dimmed by the outside world, Honest Men serenade with gusto (“Rose”), shake harder than Elvis (“Mad Love” and “I’m Okay”) and bring along some MGMT-style electro beats (“Lose My Head”) to make what is undoubtedly the sleekest summer album of the year. It will be hard to resist getting Honest Men stuck in your head on permanent rotation once you give it a try, and truth be told, I wouldn’t want to prevent it. There’s something quite stirring about finding a band that can create grooves and hooks that are as catchy as this without having to file them under the “guilty pleasures” moniker.

With all of its elated pomp and colorful synthetizations, you’d think that self-awareness would have gone flying out the door with the volume knobs on guitarist Brooks Whitehurst’s amplifier, but the polar opposite is true when it comes to Honest Men (both the band and the record). Vocalist and leading man Seth Findley never comes off arrogant or full of himself in his methodical approach to the microphone. Instead it often feels like he’s providing a mouthpiece, a stage if you will, for all of the feelings and inner thoughts that have a hard time finding a platform to be expressed. This makes for incredibly transcendent lyrics, and I must say that they make a fine combination with the progressive structure of these songs. Whatever this unit did between Okay Dreamer and this most recent recording could remain a mystery, but what is abundantly evident is the quantum leap they’ve taken in their creative evelopment. Honest Men, in an abstract sense, could almost be described as a forgivingly human take on superficiality; and my, what a thought provoking take it is.