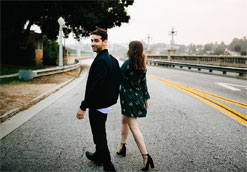 Today, it’s our profound pleasure to introduce you to an endearing new video from Mikey Wax, an artist counted among the “15 Musicians You’ve Never Heard Of Who Deserve A Grammy” by Rant. And if it’s true that you’re unfamiliar with Mikey, we’d wager you’ll soon share Rant’s assessment. But wait – we think that you have heard Mikey Wax, even if you didn’t know him by name while you were humming along. His music has been featured on So You Think You Can Dance, Keeping Up With The Kardashians, The Real World, Dance Moms, and other television programs. Additionally, his infectious songs have been featured in worldwide ad campaigns for Nike Swim, United Airlines, and Hollister Clothing. “You Lift Me Up”, his inspirational 2014 single, scored promos for NBA and NCAA basketball games. It’s also been streamed millions of times across platforms – not bad for a completely independent artist! Movies, programs, commercials, playlists – Mikey Wax’s tracks have been placed everywhere. If you’ve got a TV, or a phone, or a working Internet connection, you’ve encountered his voice. It’s no surprise he’s already gained over one million social media followers.

And there’s also a pretty good chance that you’ll recognize Mikey Wax’s face. His prior videos have been played hundreds of thousands of times on YouTube. The secret to his appeal? Sturdy pop construction, heartfelt lyrics sung from identifiable perspectives, crisp production with an emphasis on clarity and communication, and a sweet, approachable vocal delivery. That’s been the formula for success for the young Long Island singer-songwriter, and “Big Little Life”, his latest, is another winner. Written for his fiance, it’s both a statement of fidelity and a declaration of faith that love is all he’ll ever need. Don’t be surprised if it’s the soundtrack to the next wedding you attend.

A song as sweet as “Big Little Life” requires a video that underscores its message, and Los Angeles director Maria Jorjezian has fitted Mikey Wax with a quiet dazzler. It’s also a bit of a coming-out party for the star: many of his popular YouTube clips have been lyric videos. Here, his face is front and center, and Mikey Wax turns out to be exactly the sort of man his music suggests his is – friendly, ingratiating, enraptured, in love with his surroundings. When the clip begins, Mikey is along in a barren house. But as the song progresses, his home begins to fill with furnishings, signs of cohabitation, and finally a wedding cake. By the end of the video, the music has conjured up Mikey’s girl, and he sings right to her as both lovers are engulfed in light. It’s a perfect metaphor for how our lives are made full and meaningful by the people we’re connected to, and it’s a clip made for sharing with those you love.