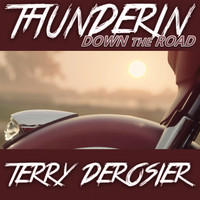 Terry Derosier’s “Thunderin’ Down the Road” is a single built upon a simple arrangement. It begins with a chugging acoustic guitar rhythm, where organ fills enter the mix before Derosier’s vocal. At about the track’s midpoint, however, the song slows down to a crawl before rolling faster again with an organ solo, which is followed by a full-on electric guitar solo that shotputs the music to the track’s end.

Lyrically, “Thunderin’ Down the Road” is like a latter day Easy Rider anthem. It’s about the joys of motorcycle riding. Deroisier isn’t just a rider that rides anywhere, though; these lyrics speak to connecting with nature during bike rides. In fact, his biography describes him as “an American folk-rock singer/songwriter who loves motorcycle riding and the great outdoors.” And this one song alone pretty much sums up that man’s primary interests.

The song’s second verse describes Derosier’s physicality, with lines about his beard “growing wild,” his weathered skin, sunglasses and bandana. Or, in other words, his riding uniform. Riding is also a musical thing for Derosier, as he sings of how his guitar is strapped behind him and two pistons are pounding time. One imagines this is one rider that gets inspiration for songs while he’s riding his motorcycle.

Furthermore, motorcycle riding is a kind of motor therapy, if you will, as Derosier sings about riding to address emotional pain. Perhaps nothing eases his mind quite like revving up his motorcycle and going for a ride.

The song ends with lines that speak about the end of life, with the suggestion that Derosier quite possibly prefers to ride on into heaven when he dies.

Terry Derosier might not have been born to be wild, but he was certainly born to ride. This song is his testimony to that.