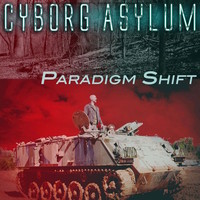 Every day in the world, people are seeking new ways to do business. People are seeking no ways to create medication to cure various diseases, while people are trying to invent new technology to make the world a better place to live in…According to the Merriam-Webster Online Dictionary, a ‘Paradigm Shift,’ is considered to be “an important change that happens when the usual way of thinking about or doing something is replaced by a new and different way.” And that is truly an amazing definition to ponder as the amazing band, Cyborg Asylum has graced us with a new single entitled just that: Paradigm Shift!

Hailing from New York, New York, Cyborg Asylum consists of the power team: David Varga and John Tumminia. Both Varga and Tumminia have an established resume that has placed them in the world of film, television, and some of the most iconic music industry highpoints! At first listen, Cyborg Asylum have a magical 80’s and early 90’s sound and instantly places the mind on captivating iconic themes from Miami Vice, Night Rider, and Duran Duran! The amount of time taken to create their music alone screams intricate as the production is over the top in every realm possible! Theme song and Film Scoring to the maximum are amazing treats to hear firsthand and to be quite honest, pushing play over and over again wouldn’t be a bad idea to try out! The duo has truly created an amazing sound while also keep the listener guessing for what’s next as the music is eclectic in the highest form! ‘Paradigm Shift’ has the elements of classic electronic movement, but shares a true message about life and how the world is shifting. “Reject the denial…When logic is broken…,” just a few of the very powerful lyrics from ‘Paradigm Shift,’ it is agreed that we are living in a time where things are shifting in life whether they are asked for or not. The situation at hand is that everything has a place in life. As a human, you can either choose to live according to the way you dream of or settle. A well entertaining and remarkable performance packed into this four minute and thirty-one-second song!

A powerful opening single from Cyborg Asylum has come forward in ‘Paradigm Shift!’ I must add that I felt like I needed to pull up some 3-D glasses, popcorn, and a huge soda to continue washing down the rest of the entertainment that I received in this first introductory song! This is what the millennial world needs right now! Musicians and groups that aren’t afraid to speak up about the times, but also not afraid to push music production to the limits! I highly recommend Cyborg Asylum and think they are a band that is going to continue turning heads!