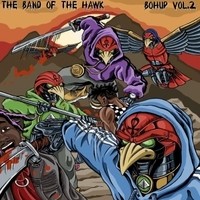 When it comes to presenting music in hip-hop, the crew of The Band Of TheHawk knows the best. By the ending of 2017, the Houston-based talented Hip Hop band released their debut music album #BOHUP (Band of the Hawk Underground Pyramid Crew). And within this short time period, they have released another remarkable music collection, “BOHUP Vol.2”. Like the previous one, this music album, too, is a hip-hop sonic blast, and it seems like The Band Of the Hawk will never stop dropping hit after hit. This music album contains fifteen amazing soundtracks that come with surprising titles. Even if you are not into hip-hop, then the titles of these songs would provoke you to listen to them.

The style of musical presentation of The Band Of The Hawk encourages the mind of the audience to get themselves lost in the old school feeling. It seems like they have been here with the audience for few times. In “BOHUP Vol.2”, the band has created astounding, consistent, and innovative music, keeping the essence of traditional hip-hop intact, following the special recipe of the leading musician, producer, Noah Archangel.

With a crew of talented music craftsmen, The Band Of the Hawk is bursting at seams in all the soundtracks, dismantling and piercing Noah’s produced instrumental. They have rejuvenated and revitalized the rap culture, celebrating the core essence of hip-hop in “BOHUP Vol.2”.

Among all the soundtracks, it is “CH@O!” that came into existence among the audience, first. The title of the song is as much unusual as its lyrics and melody. This soundtrack begins with a conscious spirit, waking up fast. But, the most surprising part is that this song is a single music track in “BOHUP VOL.2” that becomes a stage for the individual talents of the band.

In “In CH@O!” the band members have decided to leave the melody consistent, as they share the stage equally to show the audience what they got the best.Although several artists has contributed their musical parts in this song, the general splendor of the melody never get flat or bothered. This particular soundtrack conveys an introduction to the whole album, in the most possible innovative way.

In all the other songs of “BOHUP VOL.2”, the beat and the rhythm remain consistent, fitting perfectly with a conventional hip-hop tone. In terms of music craftsmanship, “BOHUP VOL.2” doesn’t differ much from the other hip-hop music albums. It is also filled with rapping, heavy bass, faster rhythm and beat, pausing here and there. It is, in fact, a compact and power pack musical collection of powerful and famous rap artists, who have made this album flawless. “BOHUP VOL.2” is a pure and genuine hip-hop music album that has the potential to increase the craving of the audience for rapping and hip-hop sound, more than before.

“BOHUP VOL.2”, along with its enchanting beat, captivating rhythm, flawless performance of The Band Of The Hawk, is the perfect hip-hop sonic blast, expressing the band’s hidden and underneath culture.