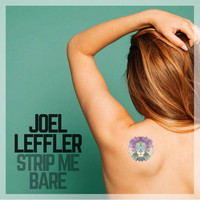 So many music albums of so many artists have been released every year. But, do all of them show the light of success? Absolutely not. Many of them are disgusting to listen, some of them are just okay, and few of them are fair enough to listen. But, music albums like Joel Leffler’s newly released ‘Strip Me Bare’, stand among the best and excellent pop tales, increasing the music and sound craving of the audience. When the times come like you are standing on the seashore, the tiny waves are kissing your toes, or you are sitting in a bar, seeking some space for yourself, ‘Strip Me Bare’ will satisfy your solitary yearning.

The musical skill of Joel Leffler lies between how he crafts, records music and the way he makes the release, and this is fairly evident in his last EP, “Run with The Wolves’. And like this previous EP, ‘Strip Me Bare’, also is glittering with the musical potentiality of Joel Leffler. The album has turned out to be the root of pure joy and exuberance, breezing melodious notes into the ears of the listener, aiming to a spell on his mind and soul.

‘Strip Me Bare’ is a collection of six remarkable songs, among which “In My Sights” is a catchy, energy-infused, and contagious song, featuring the guest vocal of Melissa Jane. The calming and soothing guitar riffs, energetic beats of tambourine, sound awesome to the ears. The lyrics of the song depict a man’s burning desire to be with a woman and his failure to express his feeling to her. Both the lyrics and melody fills the air with an aura of romanticism, exciting and tantalizing the passionate corner of the listener’s heart. This pop-anthemic soundtrack can alone manage the party mood, making both the feet and soul of the listener dance.

‘Auburn Hair’ is a soundtrack that encourages the mind of the audience to initiate a breakout escape from this world of concrete and take a flight to the land of euphoric sound and melody. With the crisp and stylish effects of sounds, coming from the reggae-influenced drumming, brilliant and blazing synth, amazing lyric, altogether remind the audience their first love. The lyrics of the song is easy to interpret, there lies no complication. The rhythm, melody, through-provoking lyrics of ‘Auburn Hair’ are evoking a sense of the sun of the summer, the unforgettable beauty of the first love, and the concealed charm of running together.

The title track, ‘Strip Me Bare’, does not come out of the musical legacy of Joel Leffler. In fact, this title track reflects the warmth of endearment, devotion, and the hidden emotion for women, and the fragility of relationship. Besides the soulful vocal of Joel, in this song, the sound of whistling, finger clicking, firecrackers, etc., pours energy, beauty of another level.

All the soundtracks of the EP, ‘Strip Me Bare’, are sparkling with the beauty of pop melody, and love theme. But Joel Leffler has successfully kept them away from the extra emotional and melodramatic stuff.