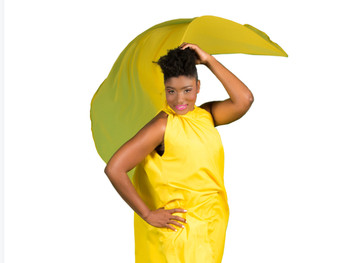 Ouida may be one of the most refreshing voices to come out of the Caribbean but make no mistake of calling her amateur. Her swelling Soprano won her the title of “Caribbean Star” – a Caribbean regional contest in the vein of the popular American talent show “American Idol”. “Caribbean Star” was offered to all of the Caribbean Islands, including the Virgin and British Virgin Islands. With more than 2,000 hopefuls, Ouida blew out the competition with her Whitney Houston-esque timbre. Prior to Caribbean Star, Ouida could be found singing in church, local concerts and shows.

“I sang every chance I got,” recalls Ouida. “I remember my mom approaching one of the local gospel music promoters for me to perform during one of their concerts. He heard my voice and agreed to put me on the very next concert they were in the middle of rehearsing for.”

In her early twenties, Ouida recorded two full-length albums at Jahphix Studios in Tortola. It was there where Ouida began honing on her vocal and recording abilities with studio owner and songwriter Kelvin Titley, Grammy nominated producer/songwriter Kamau Georges (Lady Gaga, Clinton Sparks), her cousin Alton Bertie (Destra Garcia, Richard Branson) and Leroy Watson. Becoming an ambassador for programs like “Kid’s Day” and motivational school visits, Ouida began using her musical talents in local government. Currently, Ouida assists the government promoting Music and Performing Arts on the island via the Youth Affairs and Sports program – one of the many programs affected by the devastating Hurricane Irma that struck shortly after shooting her music video.

Ouida captures these sentiments in her music visual by encouraging her lover to stay in for a romantic evening instead of going to a “fete” – Caribbean party. Adorned in a colorful headdress and draped ensemble Ouida coyly insists on other activities listeners can indulge in than a typical Friday evening.

“It doesn’t have to be all sexual,” says Ouida. “It can be conversation. Love can be looking into their eyes. Love is fun. It doesn’t have to be consumed in a large crowd or scene for anyone to enjoy. I want people to forget about the fete and live in the moment of one another.”

One moment of watching Ouida’s new video and it is clear that the British Virgin Islander artist is simply unforgettable.