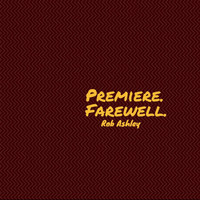 It is a kind of aphorism that good things will make you wait. After gigging around the live performances throughout North-East America for almost 25 years, Rob Ashley has recently come out with his own music album, ‘Premiere. Farewell’. It has been, for sure, very hard for his fans to wait for an exclusively Rob Ashley music album. And it’s finally here! The amazing ‘Premiere. Farewell’. It contains nine soundtracks, and Rob has created a magic-spell with the indie-pop tune in them. Once you hit the play button, you can’t help but listen to all the nine tracks at once and play over again. The songs reflect a wide spectrum of sound and emotion through a strong and stable narrative.

The album opens with ”The Drug Didn’t Last forever” that has earned great applaud from both the audience and critics, singlehandedly. There are a delicacy and tenderness in the melody that breezes through the song. Rob’s humble voice appear with such a clarity, and honesty, that as soon as the song opens, it touches the heart of the listener to its deep core. Neither Rob’s vocal seems to be too flamboyant nor is the melody flashy. They, in fact, go hand in hand from the beginning to the end. There is no overloaded instrumental part, no hastiness in the pace; Rob has chosen quite a slow beat and pace to express the real emotion hiding in the title of the song.

The thought-provoking lyrics goes smoothly with the layered guitar and the overall music composition and creates a pop vibe in the ambiance. In terms of lyrics, Rob has successfully weaved a narrative, putting the details of devastated emotions, mental struggles, feelings, through the storytelling mannerism. It seems like Rob sings ”The Drug Didn’t Last forever”, with the real emotion of a real character. And this is something that connects the audience the most. Although this is the opening song, it seems like ”The Drug Didn’t Last forever” is the showstopper of the album, ‘Premiere. Farewell.’

The following soundtracks of this album are, ”Pleather”, ”Parlour”, ”Two Years To The Day”, ”Drinking In My Arms”, etc. All of them are driven by Rob’s fantastic vocal, playful yet ear-soothing melody, electrifying guitar notes, and drumming. All the other songs hold the difference in lyricism, the structure in melody, instrumentation, etc. But one thing remains common from the beginning to the end of ‘Premiere. Farewell.’, and that is the magical and spellbinding vocal of Rob Ashley. From ”Pleather” to ”Grey”, all the eight soundtracks are unique and individual in evoking sound, and melody, and why wouldn’t they be? They are, after all, the masterpiece of a seasoned musician like Rob Ashley. And this remarkably experienced musician has combined all the leading genres of music to create such an extraordinary collection of music, ‘Premiere. Farewell.’.