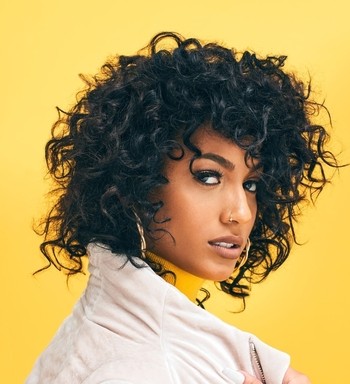 DaniLeigh A.K.A. Danielle Curiel is an artist of traits, as she has played the director role, as well as been a dance, choregrapher, and singer of course. Over time, building herself upward, writing and recording material, releasing her EP “Summer With Friends” (2017), with a follow-up set in stone for 2018! She just has so much line of activity, there it is a lot to take in and go off of as one person. But for DaniLeight, she has a lot more underway! DaniLeight herself goes into discussion about all that she has done so far and what she has in-store.

NP: Your stage name is DaniLeigh but you’re known as Danielle Curiel, so why the name change for this particular project?

Since high school, a lot of my friends called me Dani, I thought it would be a dope stage name, but thought it’d be too short. My middle nameis Leigh so I combined both and came up with DaniLeigh.

NP: You ended up playing director, directing Prince’s video for the track “Breakfast Can Wait”. So tell me is this the artist Prince that everyone knows as Prince or was it another Prince? If it is the one well known, what was it like working alongside such a known act?

Yes , it was Prince, THE Prince….The legend. It was a crazy experience working with him… He gave me full control over the video “Breakfast Can Wait”. He mentored me over my music career, gave me amazing opportunities, knowledge, opened a lot of doors. I’m very grateful to have known him.

NP: Besides doing the director role, you are also a dancer and choreographer and singer, how do you juggle so many traits and activities of choice?

It all works out for me in my favor. I’ve trained myself to be knowledgeable in all roles so I know exactly what it is I want for my career, my visuals, my moves, my show etc.

NP: What do you think of those who can do so many things, for being one person. Like for instance, for one person who was just doing act, goes from acting to then being a singer, do you think being in one role then going into another is a “must do” ordeal for working in said industry or something the person wants to do themselves or does it not have anything to do with that at all?

Honestly I feel like it’s something that would be within the artist… For my career I want to evolve into movies, having my own brands etc. It really just depends on what type of artist/influencer you want to be.

NP: Speaking of singing, you released an EP “Summer With Friends” in 2017, tell me a little about it?

My Summer was so fun for me, I had just signed with Def Jam. I was lit, 22, moved in my own place and really just had a lot of fun. I wanted my project to feel that way, and I believe that’s what I did. Music was lacking “life” and colors, I wanted to be the fun girl for this project, being the relatable relationship records as well.

NP: That EP features your single “Lurkin”, why was this track picked as a single as well as put on the second season of the show “Insecure”?

Lurkin wasn’t a single for me… but I knew it would make a splash in the industry, it’s so fun and relatable, everybody lurks! Insecure chose the song because it fit for the show. They heard it and knew exactly what episode to put it on.

NP: Can you disclose the other tracks also released called “Play” and “All Day”?

Play is my boss up record…followed by the visual I wanted to show women empowerment. It’s a club record and it’s fun. Got an Ugly God and Bill$ remix coming soon! All Day…. if you didn’t know I’m 100% Dominican.. My producer Retro is also Dominican. He showed me that bachata beat and we completely flipped it and created an original Trap Bachata song.

NP: You are currently working on the follow-up release, in the form of a full-length album, out this year, where are you in the process of this release?

I’m gearing up to drop a “Summer with More Friends” Project. I want to do a part two for this summer, which will be dropping in June, before my tour happens in August, with Jeremih. After/before I’m steady traveling and recording, picking up songs will occur for my debut album. :)

NP: How different or in comparison if not equal to would you say this album is to your previous EP release?

It’s an elevation for sure. I have to come with it, visually, aesthetically. I can never stay the same or drop something after my project that isn’t better. The songs are sooo dope, still a Dani vibe though. Can’t wait to drop’em! :)

NP: When can we expect the album to be released?

NP: You just wrapped up at SXSW and did a radio promo tour, tell me about these events and what did you take away from them?

I’m seeing the movement. Going to each city, showed me that hard work has been paying off for me. People seem to rock with me, and I know as an artist, shaking hands and going around really keeps things going, it’s a grind for sure but it’s really worth it.

NP: What other plans do you have for 2018 that you want to share with us?