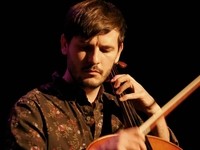 Joshua McClain is a cellist, composer and studio artist based in Oakland, CA. He’s best known for his unbridled and mesmerizing solo performances using a looping pedal and effects processor, creating intense, otherworldly soundscapes. He regularly performs with six-time Emmy winning songwriter Monica Pasqual in the group, Monica Pasqual and the Handsome Brunettes. Coming Home, released in February 2018, is a concept album based on Joseph Campbell’s, hero’s journey. Joshua has toured and performed extensively in North America as well as Germany, France, Japan, West Africa, and Argentina.

The work of Joseph Campbell gets an adaptation from Joshua McClain that combines the mythical folklore with his own personal journey and conveys it to the masses to interpret in our own way. That’s how this concept album crosses boundaries of its own as well as being loosely based on – hero’s journey. This instrumental album takes you on a majestic trip that defies categorization. Folk music never sounded so cool and spacey because of some of the effects used around these arrangements which are centered on strings, particularly McClain’s cello, inflecting an assortment of styles that render it very progressive.

The journey goes through several phases and I believe some of the titles can be found in Campbell’s work, but not having read it, I can’t be sure. But it follows the same concept anyway, to get to where it is headed, as well as the artist and the listener. “Journey” is the opening track and essentially warms things up with a lovely string arrangement that goes all over the map with high and low registering notes to get you on your way. It’s a soothing track with great moments of intensity and some fantastic dueling toward the end, before it calms back down and sets up the following track.

Leaving no space between, “A New World” begins with a dreary into to distinct it from the previous cut, but as a means-to join the songs which are meant to, and consequently play like one entire piece of music. This track beautifully contrasts the former with some completely different musical territory which suggests much more to come in that department as the journey wears on. It defines its titles that way too, as you’ll clearly notice how it does that to bring on this sector of the journey, which is by and largely found through the music, rather than Campbell’s written word. It’s a remarkably great musical depiction.

“Spirit Guides” is where it gets undeniably awesome, with the spiciest piece of music on offer. This wins the whole set, but not one song on here is of any questionable greatness. The addition of female vocals (no words) throughout this track is but one of its highlights. The guitar work is stunning, with an absolutely-magnificent show of shops. The percussion is healthy with snare and it’s just a smoking hot number. Then it’s “A Storm On The Horizon” and the mellowing down of “Underworld” make another great combo of tracks in unison. This album is a musically enlightening force to reckon with.