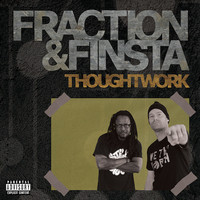 This year, Fraction and Finsta, the famed rap artists, have introduced a new cut to the world of Hip-Hop through their album ”Thoughtwork”. The music album comes with a fresh flush of beats, heavy rhymes, and thought-kindling subject matter. “Thoughtwork”, shines of the influence of the East-coast Hip-Hop, along with a conscious rap.

The album includes twelve soundtracks; all of them reflects the individual pattern of rhythm, rhyme, and instrumentation.Through the complete presentation of this musical album, Fraction, and Finsta, is celebrating the real essence of Hip-Hop genre, moving the ridges of rap all over the world.

Among all the 12 soundtracks, “That Ain’t Me”, hits the marks on all counts. It is, in fact, the single and video release of the whole album. In terms of the beat, Fraction and Finsta has maintained a smooth surface, where they can roll over their complex rap and thought-provoking lyric. The song is bold enough to flow in your mind through its lyrics and melody to penetrate your head.

All the songs of “Thoughtwork”, deliver different features and textures, running like the loop to hypnotize you and take you to another realm of Hip-Hop. The intoxicating melody, bold and contemporary lyrics, will make an echo in the mind of the audience. They cannot help but listen to the songs all over again and again.

”That Ain’t Me” is like a concluding song of the album, depicting the city life and its surrounding, wintery fashion, snow falling, etc. It’s not like that in the songs of the Hip-Hop and rap genre, the artists focus only on building the noisy, and heavy bass music. Fraction and Finsta have earned the crown of greatness no only through their musical crafting, their excellence in weaving the spun of words is evident in this album.

Besides being rough and tough, the lines like ” “i keep telling time to wait, but it stop for no one”, makes ”That Ain’t Me”, a timeless classic and the gem of all the soundtracks.

Besides ”That Ain’t Me”, ”In the City”, “For You”, “When The Tide Turns”, etc., shows the musical expertize of the artists. The album makes it clear that Fraction and Finsta are as fluent with the pen and paper as they are strong and sharp in front of the mic.

All the soundtracks have a close and justified relation with lyrics, rhythm, the punch of syllables, hypnotic repetition, playing through indomitable energy. The songs are the reflections of the creative perspective of the artist. It is a natural talent, impregnated by their mind; they don’t need to work hard to give birth to such musical creation. All they need to refine their talent to run their creation with a flawless rhythm and flow.

“Thoughtwork” is the diamond of all the musical presentation of Fraction and Finsta. They have cut all the edges of it, to make it look shiny and alluring among the audience. In terms of the style and sound, the album must be a hit among the fans of this dynamic talented duo.