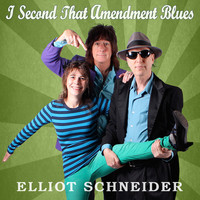 The famous singer and songwriter, Elliot Schneider, has been glorifying the world of music for many years, compared to his contemporaries. His songs come with a fresh melody and jovial mood. In most of his musical creations, he follows the trend of the 60s’ and 70s’ rock style. “I Second That Amendment Blues”, the latest child of Elliot’s artistic creativity is no exception. In fact, it comes with such a classic tune, that audience cannot afford to miss it.

According to Elliot Schneider, ” the terrifying murders of the children and teachers in Parkland, Florida”, has influenced his song, and his mind has popped up “I Second That Amendment Blues”, after the two days of the incident. No doubt Elliot’s mind has been jolted by the incident that he comes up such a beautiful song.

The audience can make assumptions what could be the theme and background of “I Second That Amendment Blues”. It is a free-spirited satirical song that Elliot has launched into such a social turmoil when innocence dreams and emotion get squeezed over. The tone of the song, in fact, helps the audience to raft in the tumult of devastated and traumatized emotion.

The song starts with a fresh, energetic, and appealing guitar solo, probably making the route to follow the musical and lyrical presentation of this song. The heart of the music is classic rock and roll, under the colorful painted modernized presentation. The allover instrumentation is amazing, never becomes monotonous, not for a second.

Elliot Schneider always brings on the stage, something new, just around the corner. And “I Second That Amendment Blues”, reflects his joyful and exuberant spirit with a satirical punch. The musical crafting of the song is a reminiscence of the past, the Beatles, Stones, etc. But it seems like all of them experience a great clash and from the clashed particles, a novelty creation of a new identity named “I Second That Amendment Blues”, takes birth.

The underlying theme runs through the lyrics and melody of the song, is a bit melancholy. Even Elliot calls this song as ”a call to (loving) arms”. He has attributed “I Second That Amendment Blues” to those children, who have died so young. This song is like the smell of fresh flowers that comes through the breeze, cheering up the grief-driven heart.

The song, “I Second That Amendment Blues”, is a total genius, it is tough to classify, categorize or crucify. The audience cannot help but fall in love with this song and get lost in it. The lyrics surrounded by the typical style of Elliot music will definitely melt down the heart of those who haven’t listen to the song yet.