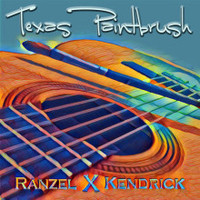 Ranzel X Kendrick is out with the first of three albums in a collection of original songs called Texas Paintbrush. The second installment, Texas Sagebrush is currently in production, and the third, Texas Cactus, will come out later this year. Kendrick is an intriguing artist with a rich and dynamic sound, with a variety of melodies that make Texas Paintbrush a interesting and beautiful album to listen to. His music alternates between country, rock, and the signature indie sound. It’s

“Where The Wind Blows” is a fun, feel good song which features a female vocalist on the track. It has a sound that makes me think of a Disney song- light, bright, and full of a carefree feeling. It isn’t a complicated song by any means, with the whole theme being summed up nicely throughout the entire track. “God only knows where the wind blows.” It’s a track that encourages you to sit back and chill out, basically, and it does that very well.

“Stand By Me” is a cover of Ben E. King’s iconic and timeless song. Kendrick has his own spin on it. I’ll admit at first that I didn’t quite enjoy it at first. Kendrick almost sounds like he has to warm his voice up- it seems strained and a little difficult to listen to. After that, however, it gets progressively better. He gives the song his own spin without turning his back on King’s version, which is especially important.

“I Don’t Want To Go Home” is the track that showcases his vocal talents the best. Kendrick sounds so smooth and sweet. I could compare his voice to honey in this song. The song itself is sad, about how going home feels lonelier and more painful than anything else. He rationalizes this choice by saying he can live a life anywhere else, even going so far as to say he doesn’t care. It’s a cutting song, but it is also very beautiful. I love the guitar work.

“Canyon Hymn” has the most impressive sound from the entirety of Texas Paintbrush. The track consists solely of a beautiful acoustic guitar. It’s entrancing and puts you in a very peculiar headspace, like a midwestern daydream with a hint of danger reaching for you and the majesty of adventure, endings, and nature. I am not usually a big fan of fully instrumental tracks, but this one is special. The title fits the mood and emotion of the track perfectly, in a way you can’t appreciate until you allow yourself to be immersed in the soothing guitar. I only wish it was longer, so I could stay in that interesting world.

Texas Paintbrush is an album that deserves recognition. It is dynamic in a way that you can’t fully pin down the genre, and if you want to guess what the next song is going to be like, you’ll likely be incorrect. Kendrick has put his heart and soul into this album, and I eagerly await the next two installments. I really appreciate this peculiar artist, and I feel many music lovers will as well.