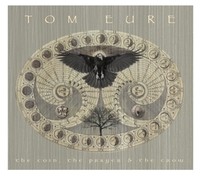 The sixth studio release from North Carolina based singer/songwriter Tom Eure entitled The Coin, The Prayer & The Crow is a thirteen song collection featuring the collaborative talents of vocalist and multi-instrumentalist Amelia Osborne. She’s a perfect musical partner for a deep exploration of Eure’s Celtic and Appalachian musical pedigree and the results are uniformly original while nevertheless demonstrating an across the board command of the style’s fundamentals. It’s more than just a product of talent. It’s the natural outgrowth of skills that have earned Eure appearances on over forty releases and the value of his musical contributions to a wide range of outside projects shows the level of respect and admiration he enjoys from his peers and contemporaries. The Coin, The Prayer & The Crow further solidifies Eure’s already secure reputation as one of the best musicians and writers working in the modern folk/Americana scene.

The presence of Celtic folk song traditions and verbiage in his songwriting has an authentic ring recalling across the ages from now near ancient ur-songs and comparatively recent additions to the canon such as those you encounter in the Childe ballads. He deftly, though overtly, invokes his aforementioned European influences with the song “The Wind Will Take You Home” and its pastoral lyricism embodies a number of improbable qualities. It sounds enormously confident from the first, yet there’s looseness to the performance, a revealing naturalness, never striking listeners as false or premeditated. His lean, economical touch extends to strictly instrumental numbers as well and the second track “Yes Please” brings his Appalachian flavors to the fore. It is among the album’s shortest tunes and rife with beguiling melodic strengths. Amelia Osborne’s supporting vocals for “Common Ground” aren’t nearly as prominent as those we heard in the opener, but she adds key strengths to an otherwise fine Eure vocal. The musical character is another colorful invocation of Eure’s Appalachian influences with the same emphasis on melodic elements we heard in the second track.

The poignant “Song of Remembrance” has some especially lovely and elegiac violin playing laced through the performance and plaintive acoustic guitar ably supporting another Eure/Osborne vocal. The fiddle playing has a decidedly jauntier step in the instrumental “The Path Home” and listeners will once again appreciate the shift in focus thanks to Eure’s continual ability to infuse his instrumentals with particularly on point melodies. Osborne takes the lead vocal on “The Carving Tree” and has a marvelous talent for dramatizing the European/Celtic sounds in Eure’s music. The lyrical material does a superb job of being a thoroughly individual piece of work yet inventively incorporating ample traditional vocabulary in a honest way. The longest track on The Coin, The Prayer & The Crow is an instrumental named “Blue Smoke Hills” and the atmospherics conjured by the title are ably brought to life by the musical arrangement and top shelf individual performances threaded into a colorful, cohesive whole. Eure’s album ends on a note of quivering vulnerability with the track “Time With You” and the directness of his approach makes it a very affecting number to end this outstanding sixth release from Tom Eure.