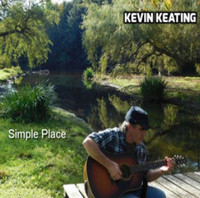 The timelessness of Kevin Keating’s songwriting approach has the potential to torpedo his opportunities to be heard and noticed. We tend to take the singer/songwriter school, one lone pseudo-folky serving up acoustic guitar driven and lyrically ambitious numbers, for granted in this age of ever sleeker bells and whistles. Once we move past our preconceived notions, often held in error, it’s clear the form still wields considerable power and there remains something almost gallant about one songwriter, alone with a guitar and the English language, struggling to make it all come out right. Kevin Keating’s six song collection Simple Place definitely draws deeply from that traditional well and fuels his songwriting with fluid, warm six string work and an equally vivid vocal skilled enough to touch the heart and invoke waves of emotion without ever possessing stereotypical technical skill or beauty. It’s the New York State resident’s second release and, undoubtedly, will solidify his standing as one of the fast rising songwriting talents on the indie scene.

The opener “Ocean Eyes” makes a couple of things clear from the start. One is that Keating’s chops on the six string are more than adequate for carrying this off and the other is that his songwriting wont towards concrete imagery and narrative-minded, though rarely linear, lyrics will prove to be one of the EP’s biggest strengths. “Roger’s House” elaborates on those aforementioned strengths and stretches a little further with its skill for utilizing significant detail to reveal character. There is a little darker hue to this tune musically than we experienced with the much brighter mood of the opener, but it isn’t so dark that it drags down the listener’s mood. His guitar playing, even two songs in on the EP, is a definite highlight, moving from straight ahead chord work to more lyrical, melodic passages with a seamlessness many players will envy. Much of this, naturally, is due to inherent talent, but one should expect such skill since Keating has been playing the instrument since age fourteen.

“Seventy Years” has a lightly melancholic air, more pensive than despairing, and Keating’s songwriting does an exceptional job of focusing on both story and character with the customary inclusion of some significant details. The guitar playing does much to invoke the aforementioned mood, but Keating’s vocal is likewise sensitively attuned to the song’s needs and handles them artfully. “Solider’s Homecoming” definitely qualifies as the EP’s most chilling bit of writing as Keating remorselessly depicts the personal cost faced by a solider long after they’ve left the field of combat. The guitar playing has a dark mood, much more so than we heard in the earlier “Roger’s House”, but its restraint is equally key to invoking a particular mood. “Standing Ground” is outright topical songwriting that makes Keating’s political persuasions clear, but it has a very human heart rather than battering the audience with issue-oriented dogma. The topicality continues with the EP’s final song, “We the People”, and listeners will be hard-put to dislike, if not outright applaud, Keating’s idealistic vision of what America has always wanted to be and still can. It closes the EP on a welcome optimistic note and his vocal is among the most sensitive moments on Simple Place. It’s a brief, but wondrous, release.