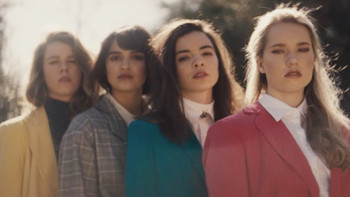 Just last week Utah quartet, The Aces, announced the release of their much anticipated debut album, When My Heart Felt Volcanic on April 6th. Today, the band is excited to share the official music video for the title track ‘Volcanic Love.’ Co-directed by Nico Poalillo and drummer Alisa Ramirez the video references some of the most iconic love stories (Great Gatsby, Heathers, 500 Days of Summer, Across the Universe and Comet) through the band’s own interpretations.

“For this video we really wanted to pull viewers into the emotion of the song,” says Alisa Ramirez. “We decided to do that by paying homage to some of our favorite films about toxic romances or ‘volcanic loves’ if you will. We also wanted to show our fans what The Aces’ Volcanic Universe looks like… a world of our own where heartbreak is mitigated by always having each other to fall back on.”