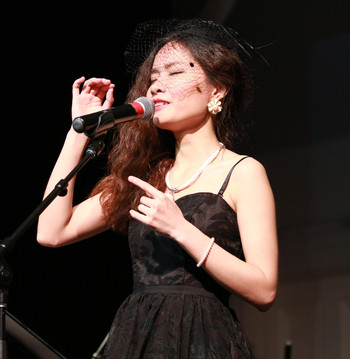 It comes as no surprise as more and more Asian artists are bridging the gap between the Orient and the States. Vivi Hu is one of those emerging artists who have been working hard to plant her own creative flag here in America. At first Vivi never thought she would consider singing as a career but something changed for her while singing in a choir. She found solace in the gospel music of the choir and realized then that music was her destiny.

The two genres of music that are a part of her performances have been jazz and gospel. But she has also embraced the sounds of her culture which she has meshed with the styles of jazz and gospel. When she came to New York she began a morning ritual where she would start her day with a dose of gospel music. The music rejuvenated her and gave her a sense of energy and inner peace. Her goal is to mesh Chinese jazz and folk music along with American and Western gospel.

Vivi’s EP is an example of where she draws her inspiration from. Her lyrics are a blend of dark feelings and a search for answers. Besides the spiritual inspiration she has also been influenced by artists like Anita O’ Day and Blossom Dearie. She first discovered jazz music at the JZ Music Festival in Shanghai. That was it for her as she was hooked and developed a passion to create a fusion of Chinese music and jazz. When coming to New York she enrolled at Queens College where she earned a Masters in Music with a concentration on jazz performance for voice.

She is more than just a singer Vivi is also known as an expert at music composition, arrangement, and concert producing. Vivi soon had the opportunity to showcase her talents at many venues like the Gulangyu Music Hall and Le Meridien in Xiamen, China and the Silvana Club, the 2017 Lunar New Year Celebration at Queens Library, and the City University of New York Gospel Festival in New York City to name a few. Only just recently she presented Chinese traditional folk and jazz for the Shanghai Memories: Golden Songs from the 1930s and 1940s at Flushing Town Hall in 2017.

In 2016 she formed her own band called Vivi’s Bubble Dream that has performed at venues like Flushing Town Hall, Queens Library, Silvana Club and The Parkside Lounge. She is the lead singer in the band that fuses jazz, R&B, Chinese folk and gospel a unique recipe of music.

Presently she is due to release her first album entitled “New Creation” which is due out on February 16, 2018. The album will comprise of gospel music all with original lyrics in Chinese and English. Besides that she is also working on a second project possibly being released in later in the year that will feature Hokkien folk fusion jazz.

“I have awesome musicians in my band, each of them is the first person I wanted for each instrument: Quincy Newell on piano, keyboard and background vocal, Anna Whitaker on background vocal, Rafal Sarnecki on guitar, David Moxey on bass, Conor Hall on drums and percussion. I recorded these songs with an amazing engineer who also did the mixing: Witnel Paul. And my label RoundTable Records also helped me with mastering the tracks, photos, distribution and upcoming release party. It’s a whole team behind this project.”

On the second project she added the talented Leonardo Catricala on bass and Feifei Yang on er hu (Chinese traditional instrument). Vivi is a multi-talented artist on a mission to bring this unique fusion of music to the masses whether it’s in the US or worldwide. To keep up with her performances visit her website at https://www.vivihumusic.com/