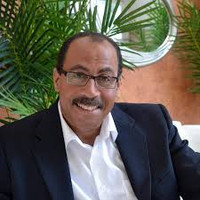 Randy Lyght’s journey from the Canadian wilds into a place of increasingly global prominence continues with his fourth release Another Side of Me. The first single from the album, “Bumped Into Love”, recalls some of Lyght’s abiding influences while still communicating a distinctive personality that makes the material his own rather than pale imitation. Lyght has been singing since an early age and retains all of the passion necessary for this music to make it fly. It’s a result of his years working on earlier studio albums as well as tenures with acts like The Platters, but his willingness to allow other’s art to inform his own proves to be one of the biggest difference makers of all. He dispatches the tune with a timeless panache that never risks affectation or self indulgence and these qualities help make “Bumped Into Love” one of the best tunes in this vein you’ll likely ever hear.

Lyght is really skilled, both as a vocalist and in selecting what musical landscape he inhabits, at manifesting a welcoming, pawing playfulness in the song. Yes, this is tried and true subject matter for any form of popular song, but there’s an artful weaving of cool confidence, lyrical pathos, and a smiling resignation over love’s vagaries that you can hear from the first. The musical arrangement is definitely a little light R&B with a slight jazzy uplift and the musicians used on the track never play a single note more than the song demands. This keen ear and musical imagination is critical to making these sort of tunes come off and not sound too hammy. Lyght serves the song well and makes use of some pleasing predictability while never leaning too heavily on clichés. It’s a rich performance all around.

As fine as the musical backing is, however, the best moments come courtesy of Lyght’s spellbinding vocal. It’s him who gives the words that added spin emphasizing their essential affability, it’s his voice that breaks down any preconceived notions you might have about this sort of song craft and lets you simply enjoy his gifts for entertaining listeners. He has a wonderful ear for phrasing that’s surely the product of a long career, but it’s also born of an innate understanding of what songs need to be even more successful. In the end, that’s where it all beginnings – with a great song – and “Bumped into Love” move than fits the bill. It gains added impact when the song’s helmed by one of the most talented, albeit under the radar, figures in that chosen style. Randy Lyght’s lost nothing of his unique flavor over the years and shows no signs of slowing down. It’s a marvel to hear anyone still embracing this time-tested style with the same artistry and enthusiasm that we hear from Randy Lyght.