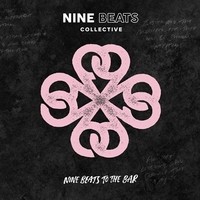 Call em Out is a piece which is unique especially in the way which the lyrics are spoken throughout the piece instead of being sung. The lyrics being spoken sounds great with the instrumentals as well as the backup singers that appear later in the song, it enhances the lyrics and the message. It’s a message of kindness and being the best that you can be by finding your true self. This self is to be found by dismissing certain social norms and seeking out who you are truly. The image associated with this single is an interesting play on the nine in the name of the group. The number is repeated in a circular image to create a flower. The number seems to be essential to the group, thus is appropriate and clever for a symbol.

This song is spoken, in this way the lyrics are very clear and that makes the lyrics the main focus. The speaking voice is joined by signing voices about half way through the piece. They sing the repetitious lyrics, “call em out. Let em come,” they are asking for your true self to be called out. This true self whom they are referring to is a self that is packed away by social norms. This is better illuminated through the lyrics,” the temple of your kinder spirits, deep buried long, ignore the temple of all familiar things.” This line implores listeners to step outside of their comfort zone in order to achieve a better level of thinking which makes persons a better and kinder version of themselves. All it takes is seeking out that persona within. This song is about self-actualization by ridding yourself of social norms which keep you from achieving the best version of you.

The cover image for the song has a chalk board background. There are erased words, in three sections of the chalk board. It’s hard to make out exactly what the erased words are. In the middle foreground of the image is a design. When the design in the middle is broken down into separate parts the parts make the number nine. These number nines are interlaced together in pairs at the curved part of the number and at the bottom. The numbers come together to form a flower like design. They are colored a light pink with some fading in the middle; the fading replicates the look that chalk makes on a chalk board. NINE BEATS COLLECTIVE is printed across the top of the cover image. The band name does not look like it has been drawn on the chalk board with chalk.

Nine Beats Collective is a collection of artist from across three continents. The group is religiously affiliated. They seek to follow ancient Biblical teachings, the Beatitudes. The song Call ‘em Out is about realizing a better version of yourself by shedding whatever false self you show to the world. It’s a premise which is spoken instead of sung and in this way the message that they are conveying is clearer than it would have been if the lyrics were to be sang.