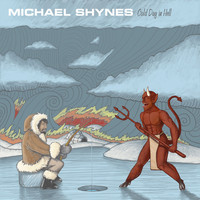 It’s refreshing to hear traditional sounds finding new expression in 2017 and showing continued relevancy. You have to measure relevancy by more than just sales and commercial standing. Relevancy means that this song, cloaked in a combination of guitar, steady percussion, and organ, speaks as directly to listeners as the combination did when it first gained commercial notice during the sixties. There’s something profoundly modern, however, about “Cold Day in Hell”. The first aspect is Shynes’ vocal talents – the production places his voice at the center of the song and wraps it up in a warm glow that’s sweet without ever becoming to sugary. The instrumentation is crisply recorded and maintains a clear separation throughout the song’s entirety. “Cold Day in Hell” will win over countless new converts to Michael Shynes’ gifts thanks to it being the finest invocation of his skills yet. It resonates with intense, but patiently developed soul and highlights Shynes’ voice in the spotlight it deserves.

The best songs are unified experiences. Unified means that every element of the composition receives the right amount of attention and the resulting effect is that this is one of the more complete musical experiences you’ll enjoy in recent music history. Much of it is guided by his vocal prowess. Many singers give a fine technical performance, but few are capable of getting completely inside of a song and dominating with sheer force of personality and charisma alike. The musical arrangement receives an equal treatment within its context. The organ and other instruments never step on each other’s foot and glide along at a confident pace that artfully straddles the line between intimacy and musical power. The self-assurance filling every note and word of the song sounds like the product of a much more experienced creative hand.

It’s the singing, really, that carries the day for “Cold Day in Hell”. Shynes, thankfully, has some strong lyrical material to work with, so this isn’t a case of him being forced to make some Herculean effort at elevating a mundane lyric, but he unquestionably adds a surfeit of poetic pizzazz to the song without it ever coming off overwrought. It’s quite pleasing to hear how he closely tailors his voice to suit the mood and needs of the song, but likewise how sharp his instincts are for what amount of pressure or phrasing twists an individual passage deserves. It’s definitely a studied performance, but never just some technical showcase and Shynes’s capacity for invoking emotion means that listeners drawn into his web are likely to be quite affected by this track. Michael Shynes’ “Cold Day in Hell” flies with inspired musical creativity and reaches the sort of heights we aren’t accustomed to hearing performers match so early in their careers. Shynes’ dedication has paid off and he’s well on his way to embodying every musical ambition if he keeps developing the talents we hear on “Cold Day in Hell”.