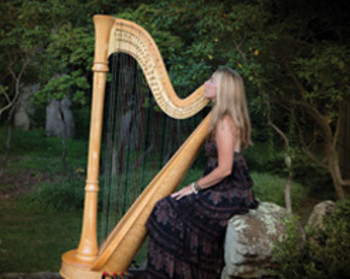 Given how gorgeous the instrument sounds, and how spectacular it looks onstage and on camera, it’s surprising that there aren’t many harpists in contemporary pop music. Yet there are a few talented artists who demonstrate, incontrovertibly, that it’s possible to apply the grace and beauty of the classical harp to modern rock. Kristy Chmura is one of those rare musicians, and in her native New Jersey, she’s an acclaimed and respected figure. Her steady, seamless integration of classical technique into pop and rock songs has always marked her as an artist to follow. She’s done it in a trio (harp-cello-drums trio Double-Breasted), as a two piece (duel harp outfit Harp and Soul), and now Chmura is doing it on her own.

Stained… Glass Heart, her debut solo set, features the same smart songwriting and inspired pop-rock arrangements that have always distinguished Chmura’s music. Once again, she’s matched her harp with a rock rhythm section, atmospheric guitars, and sweeping strings. As beautifully appointed as these songs are and as full as the sound is, the emphasis is always on Chmura’s instrument and her radiant voice. It’s a detailed world that these musicians are creating for their listener, and at first exposure, Stained… Glass Heart feels soothing, enveloping, wholly immersive. Yet there’s a dark undercurrent running through these poised songs, and nowhere is that clearer than on the pained, emotionally bare “Nothing’s Right.”

To reinforce the troubled intensity of the song, Chmura and video director Rob Fitzgerald have taken to the deep woods – the stunning Schiff Nature Preserve in Mendham, New Jersey. There, they’ve shot a clip that makes literal the internal struggles that Chmura is singing about, and they do it without sacrificing an ounce of the grace that characterizes all the music on Stained… Glass Heart. As she wanders through the trees, Kristy Chmura encounters shades of herself: the darker side, pessimist, the one who casts an ominous shadow on her mind, and another clad in pristine white representing the enlightened, higher self that she wishes to be. A solitary key offers her the ability to look within and confront herself from all angles, yet she can’t find the courage to grasp it, even when confronted with the moment of fight or flight. Breathtaking sequences of Chmura herself, at her harp, fingers in motion, concentrating, weaving a musical enchantment run throughout the clip, offering some of the most enticing clips of them all.