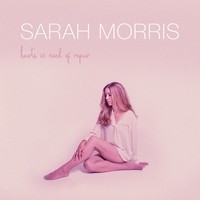 After the immense popularity from her previous two albums, critically acclaimed singer and songwriter, Sarah Morris have again returned back with her third album, ‘Hearts In Need Of Repair’, which is scheduled to be released on the seventeenth of November 2017.

Born and brought up in Minneapolis, Minnesota, Sarah has been singing and creating music from a very young age. Her unique writing style binds an engaging story which is brilliantly crafted in the techniques of country music. Her last released album in 2015, ‘Ordinary Things’, has earned her critical acclamation in the international airplay songs chart. The new album, ‘Hearts In Need Of Repair’ unveils eleven of her exceptional tuneful musical creations in a melodious blend of folk-rock and country music. Sarah has shown her competence and co-produced this album along with Eric Blomquist, in the River Rock Studios in Minneapolis. Accompanied by her longtime band-mates, Sarah has created a rhythmic harmony with her clear, meaningful lyrics and vibrant notes.

‘Falling Over’ is one of the best work by Sarah, from her new full-length album. The song begins with a balanced electric guitar arrangement by the certified guitarist, Thomas Nordlund before Sarah takes over with her melodious vocals. Sarah’s clear and luscious voice proficiently strikes an engaging ethereal around her. The lyrics are simple but posses a distinct appealing effect with its strong heart-warming words. Sarah has cleverly woven the story of love, betrayal, and heartbreak with her amusing optimistic touch of freedom and pride. Sarah’s strong and promising vocalization skills give the song a special attribute that is quite different from any other typical love song.

As the song progresses further, Andrew Foreman, the professional bassist, joins them with his eccentric musical tricks which further enhances the mesmerizing effect of the song. The chorus ‘My heart has broken and healed, from lovers who revealed themselves to be temporary,’ forms the foundation of this melodious journey which boasts a catchy tune and allures the listener’s mind instantly. Sarah showcases immense confidence while she mouths the chorus in her distinct and rich voice.

A beautiful blend of the assorted tunes of folk, rock and country music has truly influenced the single, ‘Falling Over’, to be more approachable and promising. The raw blend of rhythmic synchronization with the inspiring lyrical section is sure to instill many young hearts who might have experienced love and deception and found it difficult to move on in life. The song explores and encourages grieving hearts to confront pain and heartbreak in a more cheerful and confident manner. The music quality is kept equally brilliant as Sarah Morris’s earlier albums.

The single, ‘Falling Over’ from the album ‘Hearts In Need Of Repair’, explicates Sarah Morris’s sincere dedication and involvement in the field of creative music and her explicit talent as a singer which would surely earn her a reputation for her engaging song performances.