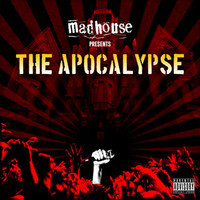 Madhouse hits the perfect sound & message with their newly released album ‘The Apocalypse’. Listen and Enjoy!

With the increasing growth in progressive music, Hip Hop has developed a long way into the limelight. With explicit rapping and quality musical delight, many talented musicians are evolving in this genre of musical melodies. ‘Madhouse’ is one such creative rap musical group who has been involved in creating amazing rap songs for many years, in their own unique style.

‘The Apocalypse’ is the new album released by this New York based rap musician’s group, ‘Madhouse’, which effectively portrays their creativity and artistic talents. The album is a collection of eleven of their best gems along with an intro which easily fabricates an instant mesmerizing charm over their audience. The intro right at the beginning generates the true ambiance for the whole album. The distinct narrative of the real world scenarios immediately captures the listener’s imagination and paves the path towards the amusing storytelling as the album progresses further with the rest of the songs.

Right after the intro comes the first song of the album, ‘War Zone,’ which begins as an extended portion of the intro and then blends into an intense rhythmic rapping section. This song itself unleashes the anxiety and anticipation of the stressful situation after an unethical crusade. The injuries, the induced calamities, and the unforeseen death are well expressed in the meaningful lyrics. Prevailing this essence immediately comes the second melody, ‘The Walking Dead’ produced by Mike Crafone, which predominantly evokes a strong feeling of distress and empathy. Supported by a mild yet balanced background setup, the song primarily upholds the soulful lyrics of a well-synchronized rap.

After the initial framework has been created, the audience is now allured with the next set of strong influencing tracks. ‘Renaissance’ is appropriately named as it brings in a soulful beat combined with inspiring lyrics. The song gracefully revives the energy and uplifts the mood from a complete distraught emotion to a feeling of hopefulness. ’The Cypher’ and ‘Ghost Town’ opens in a varied compelling instrumental arrangement which gives a distinctive beat as the words are beautifully merged in a typical rapping tone. The lines ‘I have lived with the fray of faith from the piece of faint memories from experience that I can neither prove nor explain’ from the song ‘Dim Sky’, explores the other vulnerable states of human minds which endures the powerful blows of destruction and agony. An additional attraction is the live guitar chords by Billy Rock which enhances the rhythmic engagement of the songs in a unique yet stylish way. The expressive voice along with a high-quality vibrant performance is sure to grab a lot of music lovers to this inspiring creation.

Produced by I.R.A. ‘The Apocalypse’ portrays a well-shaped compilation of a long emotional journey that carries a strong implication of fear, agitation, suffering, and empathy. ‘Madhouse’ has efficiently proven their competence at merging the emotional vulnerabilities of human nature from situations of distress and then moving on in their lives with faith and hopefulness.