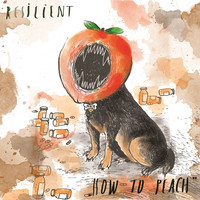 By just previewing the bands website, you can tell that they are unique. Their website is covered by bright colors and a black accent color. There is a drawn photo of the four band member’s front and center of their website. The band members are all wearing a goofy look except for the drummer. She has a serious expression on her face. Also, their names cannot seem to be found on their website which seems like an odd choice. Howe ever this just shows that they would rather that more focus is placed on their music. The photo looks like it has been painted with watercolor and has a cool blue color scheme. The photo gives the viewer a relaxed vibe coming from the band. Also, the cartoon –like but still distinguishable style of the artist of the picture gives off that feel. The style of the website and their photo is also reflective of their music. It is casual sounding and fun.

The first song on the album is Crickets. It starts with a short yell from the lead singer and instrumentals start in soon after. Lyrics begin next, there is almost no transition time between the starting points. The singer has an almost hypnotic voice. Her slightly deeper voice works with their musical style and uses the sound of the instrumentals to pull the song along. Ceiling is next on the album list. It has a softer sound and has lyrics like, “I was picking some flowers.” However, there is still a level of sadness to the song. I Broke it as Soon as I Got it is the next song. It is faster paced, sassier and has a varied instrumental tone. It changes paces multiple times in the song, making it very interesting and fun. For an Eruption is forth on the list. This song begins with drums and softens to mostly guitar. The fast beginning may be intended to go along with the title and the lyrics. “Seconds from an eruption,” is one of the lyrics from the song and at the end of the line she slowly increases the sound of the vocals.

Medication is next. This song is about medicating your-self and searching for an escape, numbness, for an upper, a downer or just something different. Another song is Comin yer Way. It starts with instrumentals with only small bursts of vocals. Then the instruments slow to allow a steadier stream of singing to flow in. The Duchess Act is seventh. It has an almost creepy, Halloween sound. Green is a contrasting song. It comes through as a more vocally focused song. Slack is next it starts with only the quiet tap of cymbals, followed by only single instruments playing one at a time. It’s a song about finding your identity. The last song is How to Preach which is an interesting contrast to the title of the album. It must be intentional to add more focus to this piece. This song is entertaining and full just like the rest of the music is.