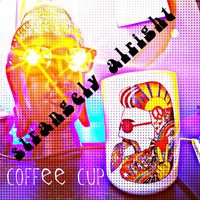 As the saying goes “Sometimes the littlest things mean the most”. Or another expression of a saying “It’s the thought that counts”. Either of these words of expression can be taken into account varying on the matter in question. For the first expression this just so happens to fit the matter of a song titled “Coffee Cup” by Strangely Alright.

“Coffee Cup”, was taken from an incident that happened during Christmas time one time, where one of the members received a coffee cup as a gift. So from that moment of receiving said gift of coffee cup, it lead to this particular track turned song made single. It’s been described as a quirky synth driven mixture of pounding toms, distorted vocals, pretty piano with some horns, with the thrown in mixture of some tremolo guitar, that is added for good measure. You get a good time vibe from all of it really.

Frontman vocalist Regan Lane explains that “This song is a snapshot into a change in perception for me. And once I started to see the underlying importance in the little things that I used to take for granted, I began to feel a gratitude for all the minute details in my life that I used to miss. And it’s cool that lately our songs have taken on a sound that is outside of what we normally have done in the past. I/We don’t want to box ourselves in. It’s exciting to continue to grow while we do this and see where new ideas can take us!”

That all being said, has given this band a maturity level of improvement from past creations. As “Coffee Cup”, does take on a whole another appeal of sound for the band, than how they would normally sound and take their music. This take sounds much more varied than the past works. It has a lot more to offer it’s listener. The synth driven mixture mentioned above, is used quite often throughout this track, in which it does really drive the force and direction of the track. While the rest of the track brings in the rest of the instrumentals, allowing them to demonstrate their abilities, such as the piano and given guitar structure. All is shown right within this track, lots of melodies, harmonies, and just good source of rhythm plays through. Lots of tones that play off one another, captures the music in a drift, that makes it more upbeat and even groovy.

In terms of quality, the music sounds put together rather well. Everything sounding great production and quality wise, as far as sound goes. Vocals and instrumentals bring it all in, sounding fabulous in all ways possible. Relating back to what Regan had said about this track, taking the little things for granted, that is something we can all relate to. While we may not want to admit it at times, it is something we have all done if not at least once. Hence, why Strangely Alright admitted it within this song’s meaning and their growth as a band.

It just takes to show you, how things in life affect us. We can then learn from those moments or minutes in our lives, using them as we please. This is what Strangely Alright has done with “Coffee Cup”. A simple matter that grew into something so much more greater, that it expanded their ways of thought and creation, in terms of music. Surely a track not to miss, because it takes you on another level of ability through the development of a group of musicians that know how to take inspiration from one thing, putting it into another thing to craft beauty.