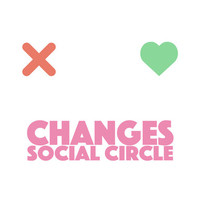 “Changes” has been making the buzz with its duo vocalists and instrumental tone straight out of the 1980’s that comes from an act who takes the word “social” to another reality of meaning. This Social Circle with their song and accompanying video for “Changes”.

“Changes”, as a song is very much like it belongs in the past that was the 1980’s era, due to its melody and harmony of the music alone. The tone of beats used throughout are very independent, as the music takes in several genres at once, pop, electronic, electropop, synth, synthesizer, synthpop, indie, alternative, and dance! All of which play off one another so well, it becomes more fun than it is entertaining. It is more fluid with the flow of the music portraying itself, that you get all these types of feelings of emotion, happiness, excitement, thrill, and tiredness too.

In terms of the video portion that accompanies said single and song release called “Changes”, that is a whole another reality that a lot of us can relate too. As the video depicts that of a single young male, bored out of his mind, home alone, without a thing to do. So what else is left but to browse the net of course, in his case though it is the dating net, in terms of the dating app and website circuit. As that is exactly what he does at first, before changing from his nighttime attire to his daytime attire in a quick dress change, as he decides to head out the door, going for a stroll around his neighborhood and town per say.

As he is walking along he crosses paths with several neighboring individuals, partaking in their own businesses, one neighbor picking up the mail, another shopping at the store, with another doing some appeal shopping, each of the three folk, taking a glance at this male, liking what they see indeed. As the male makes his way to the appeal store, he browses then whilst looking along the rack of clothes, notices a light as he is going through the line of attire, he is then sucked into the rack. Taken into a dance party club setting, it is hard to tell precisely but it is along those terms after viewing.

Where that may be where he is as of now, he takes in the chance of having a good time. Dancing right along to not just the music but with everyone else around him as well. The scene continues on as other bits and pieces continue to show the male walking in and about the area as he was before. In the end causing a line of wonder to what happens next, as the song finishes and cuts to black.

It is simply a track with a video to boot, that just sends all types of mixed feelings and emotions running through you. You get this relation effect as you are feeling this male with boredom and disappointment from the dating scene and life in general. That you find you need to change because it will make you feel better at least about yourself. That is really what this song and video is about change, being someone that is still you but changing you for the better.

Social Circle’s “Changes” is a way of change for a generation to experience that was old but is now new in terms of the past that was the 80’s into the here and now of today.