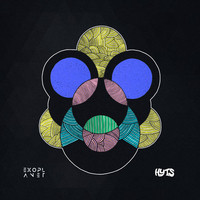 Multi-facet singer and songwriter Jacob Acosta and DJ Conrad Sasinski have teamed up for what can be easily considered one of the most intriguing and interesting acts of the last decade, HYTS. One comes from the fine desert in Tucson, AZ while the other have been making some waves in the Bay Area and beyond. Exoplanet is their introduction to a major old and new audience as a band after having worked for a long time behind the scenes.

This music captures the essence of boldly honest passion of gripping pop perfectly or in the case of HYTS quite effortlessly. The rhythms and slow burning vocals coupled with the short but very often thoughtful lyrics will cause you to think and comprehend life itself from a new and broader perspective shall we say. With a list of artistic and professional achievements as long as my foot I suspect the brainchildren behind the project are not new to this. In fact it’s quite clear to me that this group are not only experienced, they could easily be heralded as a duo to keep an eye on this year, and luckily, the ones to come. In music, delivering breathless performances and challenging conventional wisdom are often deliberate efforts to establish a marketing niche, but regarding affairs of society and oneself it’s feels like a natural state of mind and being. Something that rarely (if not, never) can be found on this particular type of music, where shallowness prevails. Whatever the case this 7 track collection is a finely tuned balancing act that speaks volumes about HYTS and their cryptic, yet straight-forward message. Along the path one will find vivid songwriting and evocative emotions thanks to not the dramatic vocals, but also the trademarked 90s’ House vibe. “We Are” swims in the deep end of the pool with acts with such a diverse group of acts, from the usual suspects Depeche Mode to Nero and even some Pendulum. “Synthesize” closely resembles pop songs in terms of length and musical form, but this is not to say its only element. And that’s one of that makes this record so exciting, each song seems to follow a pattern that get lost in the sea of different influences and styles. There are some heavy 80s elements -thanks in great part to Acosta vocals- hidden behind layers of modern walls of melodies that get under your skin and never let you go. It’s like a drug that takes control of you and never let you go.

In the pleasant malaise of sound and songs-manship this CD delivers, be prepared to be set adrift on a trancey sea of emotions of love, existentialism and hope. Other times awry in happy thoughts, sometimes exploring the dark corners we don’t dare to cross. HYTS really seals the deal for me in the end with their transcendental music work and vocal emotions which cannot be faked, especially how high and low along the emotional spectrum they travel – like life itself.