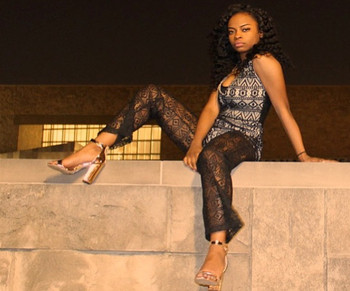 Ana Morris the 19-year-old Hoosier, is a contemporary soul singer willing to bare it all, to get her name out into the open, even though she has yet to find herself. “Hit That”, and “Take A Ride”, establishes Anna’s confidence as an individual, as she is introducing herself and her goals within the music industry. By doing this, she is enticing everyone to behold and enjoy her tunes. Ana Morris being just the one you may want to keep that watchful eye on.

NP: “Take A Ride”, was your first come-out single accompanied by a nice video, would you be satisfied if this became the most popular record of your career? Or do you have something else your holding in the wings that we haven’t heard yet that you would want to be more known for?

Alright I love “Take A Ride”, I see something bigger to come in the future. So with this song, there will be something to look back on as far as the early stages of my career within music.

NP: “Hit That” the B Side of “Take A Ride” is something totally different. It’s like you were two completely different artists. I mean, we can still hear the same powerful voice on it, but where did this record come from? Did you really want to do a wild and fun weed record? Can we expect more records from you that come from left field?

Yes, I agree they are both two completely different tracks. The record came from something I can relate to as far as something I do with my personal time occasionally. But I will say this, that yes you can expect more from the left field, because I am goofy, serious, and shy. So I am always mixing my personality into my music as well.

NP: Some would say that your style is very reminiscent to that of Aaliyah Haughton, who also had a tendency to shock people. Would you agree that you take notes Aaliyah or was that just by accident and you were aiming to create something else?

I would say by accident. Don’t get me wrong, it is an honor to be compared to such a legendary artist such as her, may god rest her soul. But I’m always aiming to be simply just me.

NP: What do you think of about being compared to other artists like Aaliyah, among others, are you pleased or annoyed, because maybe in the back of your mind you want to be just you, ya know?

It doesn’t bother me at all actually, because as an upcoming artist, I’m still in the stage of finding my own sound.

NP: Will both of these singles be included on a future release, like an EP or a full-length album, or just remain as singles?

Yes, they both will remain as singles.

NP: Can we discuss the location whereabouts for the video of “Take A Ride”? It takes place in your home state of Indiana, where you were born and raised. So where did you go for this video? Are these spots you visit all the time or just highlights of what Indiana has to offer?

Yes, in the video were shots at a place called Washington Park and the Downtown Monument. It’s actually both places! They were places for the highlights of my city and the places I sometimes hang out at as well. Also along with Broad Ripple, and other parts on the North Side. It’s one of the few nice looking locations right here in good old Indy.

NP: Who would you like to collaborate with in the future with your music?

At this time, I’m just really focusing on my own music, developing my music and becoming the better person than the one I was yesterday. But of course, if I had to choose someone, I would then say JCole! He’s very inspirational and his music is very uplifting! I love how it has a meaning and a story behind it.

NP: Do you have anything new coming? What are you working on right now?

Yes, I have some new singles that will be released very soon! Be on the lookout because you sure do not want to miss out!

NP: If you could do a show anywhere with anyone, who and where would you pick?

Hmmm…. That’s a pretty tough question. I would definitely have to say Anita Baker, and the place I would choose would be somewhere overseas! Probably like London, England!

NP: How do you think being from Indiana affects your sound, if at all?

I don’t think being from Indiana affects my sound at all. In fact, I think it gives me the opportunity to show people what a small town city like mine can do. I have so much talent, I feel it makes it more broader, since there is no distinguishing categories that a girl from Indy would sound like for that matter.

NP: What do you have planned for the future, in terms of shows, touring, or the Labor Day holiday season? Can you believe the back-to-school fall season is already here? How was your summer of making records?

I look forward to touring and doing more shows as soon as possible! For the Labor Day holiday weekend, I will just have a family reunion and spend some time with my younger brother, who just graduated from basic training! Congratulations I love you bro! Yes, time has really flown by, I can tell you that much. It was actually lots of fun! It was a great experience, where I got to meet a lot of great people! I definitely cannot wait to see what the future holds.

NP: If you had to pick one song to play for someone who hadn’t heard of Ana Morris, which song would it be?

I would choose “Fly Away”, because it captures me in a different point of view. It gives the audience to see who I really am. To see more than just the goofy yet fun side of me, but more of a serious me, led by a powerful voice!