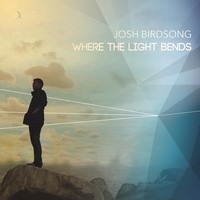 Nashville-based indie artist Josh Birdsong is coming out with a new EP on August 28th called Where The Light Bends, and one of the songs on it is called “Complex Context.” Birdsong has a unique sound and it reminds me heavily of atmospheric rock, with all of the elements. It feels more like it’s an experience, rather than just as song. As evidenced by his past work, this is Birdsong’s signature in his music.

I’ve had a rough few days, and this song calmed me down almost instantly. Few songs have that effect on me, and this was before he even started to sing. Birdsong has a very interesting voice, one that is a soft and lovely to hear. Nothing about this song feels out of place, and the vocals are no different- it almost feels like the music was made to match his voice perfectly. His guitar work is so impressive and I could listen to it all day. Even that is soft and calming, even towards the end of the song when he gets to show off a little more.

The lyrics are simple but I adore them. The song is about looking at life through a more fantastic lens. I like the idea- taking the realism out makes it less scary, more manageable. Even if that isn’t the point of the song, that’s what I took away from it, and I really admire it. “Such simple subtext, such simple context, could it be a little more complex?” I really love this, and I love how Birdsong sings it.

There’s something that feels ethereal about this song – and the rest of his music – that feels soothing. It is timeless. Another thing I think of when listening to “Complex Context” is the ocean. A good day, with perfect conditions, where the water is gentle and warm. The beach itself is a great visual, with the sand between your toes and the waves washing over you. I’ll definitely be adding this song (and his other work) to one of my calming playlists- it’ll make a wonderful addition.

“Complex Context” reminds me of some new wave songs from the 80’s, especially towards the end of the song, with ambient music mixed in. It’s no surprise to see that Tycho is listed as one of his influences, as composer Scott Hansen uses vintage synthesizers with a mix of his own ambient sounds. It’s nice when you can clearly see where someone gets their inspiration from, without feeling as if they’re trying to copy it. Imitation isn’t the most sincere form of flattery, after all.

I recommend “Complex Context” and the rest of Josh Birdsong’s work- his is a talent that I think most listeners would be able to appreciate. It’s an experience worth having, and I’ll be following his work from here on out to enjoy his unique sound. I can’t wait to see where he goes from here, and to hear the rest of the songs on Where The Light Bends!