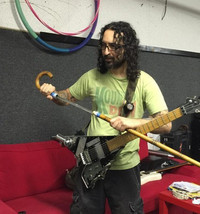 Experimental rock artist Herman Martinez released the much-anticipated follow-up to 2015’s Solopsi Radio, this summer’s Secret Doors Hidden Stairs. Working with Ahmed Mahmoud and Hank Yaghooti, all three of these men are seasoned vets who’ve played their fair share of shows in the New York City/New Jersey rock scene from the infamous CBGB’s to The Bitter End to The Knitting Factory. Together they’ve brought all their skills to the table for Herman Martinez’s sophomore release. Influenced by bands such as Pink Floyd, Soundgarden and Radiohead. “Phonic Chronicles” kicks the album off with what sounds muck more akin to Aline In Chains than anyone to be recalled from it. This is a good thing though, because it’s an epic opener that just pulverizes you no matter where you heard it before. This is an undeniably awesome opener with a haunting atmospheric backdrop. Sell your soul at the crossroads, this will keep you entertained if you like dark it and grungy. The next track “Fictional Realism” is like a come down after that, but a very good come down it is. I sure liked it anyway, it gets the blood pumping for more. “Spoonbender” isn’t as good as the formers but so what, it too keeps you pumped and I like the percussive values that drive the whole number. The guitars pick up without overdoing it and grooves pretty-well along. It’s pretty-different. But if you want something truly different look no further than the next track “Every Letter I’ve Ever Sent” seems to go in depth a little by Herman Martiniez. It is interesting but then the first tracks still stayed with me. So, it’s all interesting. It’s just not overly exciting to me at this point. But this changes on “Dogon With The Wind” as it equals the fury of the first track.

“Sculptor” is where a chance to appreciate some musicianship comes in with a sweeping intro and some more of that Alice In Chains sound. Sure, you hear other influences in their music, because mostly it’s the vocals that remind of that band. It’s a compliment and everyone should know that. This is not a weak effort come off original or anything, it’s very much his own thing. And this is another cosmic track that contains some bone crushing moments. It takes you up and down without losing you for once second. Just the way some of the influences like Pink Floyd here do throughout the album.

“Verse Chorus Universe” is a wicked track as well, and by now Martinez can’t be just thought of as the sum of his influences. You are either on board at this point or you aren’t. That’s all there is to it. I liked this just as much as any other track, and it helps keep it all glued together that way. There is even something totally positive to be said about the final track, as “Recreate” takes the album out with a steadily paced version of several of the best moments on Secret Doors Hidden Stairs. As if to recreate moments in every way possible. And that’s a tall order delivered for only his second helping.