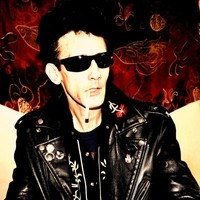 Robert Caruso is a singer-songwriter-guitarist-multi-instrumentalist based in London, UK. He started in Italy in his early teens as Rob Leer (& The Electric Kids). From the beginning he performed original material, rooted in the Blues, ’50s Rock ‘n Roll, ’60s classics like The Velvet Underground, The Stooges, The Rolling Stones, The Yardbirds, The Doors and Jimi Hendrix, and Punk Rock acts like Johnny Thunders, Ramones and Sex Pistols.

Starting from his hometown of Cosenza in South Italy, he moved first to Rome and then to London. He toured all over Italy and his early material is now collected on the album Rob Leer & The Electric Kids. After releasing the album “Three Minutes To Midnight” in 2016, Robert returns with two singles of which there are promo videos. “Burn Baby Burn,” and “Real Cool Cat.” Both manage to sound quite the same as the works of the previous album, which is intentionally gritty with very low-fi production values. But if you’re familiar with some of the bands listed in his bio which includes the likes of Nico and Johnny Thunders, a cover of a Yardbirds classic and even one by the New York Dolls it is really no surprise to hear the vintage grade mix. If that is your cup of tea or you can look past it, you’ll get where Robert Caruso is coming from. Robert looks like he’d fit right into The Cars with his rockabilly looks, but the “Burn Baby Burn” video clip can distract from the overall track, so, it’s also recommended to listen without watching too. There is an incendiary appeal to the track, which fits the title perfectly. But this is not everyone’s favorite sound. If you’re not already a fan of rockabilly and punk, it might take longer to get into. But rest assured this is intentional for his particular fans who do appreciate it. This is a slinky rock tune with a lot of moxie, with the vocals being the only short spot but you’ll get over that once the track sinks in.

The only minus to the track can be pointed out by the repetitive chorus, not the sound of his voice. It balances between catchy pop and a harder, more industrial sound that you either like or you don’t. And all you get from the video clip is about the same as most of his clips where it is just him standing in front of some scenery, running through the track. In this one he’s smoking a cigarette. But the song itself is what’s important, as it manages to outweigh the visuals and then some. It winds up a standard Robert Caruso single, once you wrap your head around the whole song for what it’s worth. The second single of the two is “Real Cool Cat” which is nearly the opposite approach and features a better landscape behind him in the video clip, but once again the audio prevails. That is not to detour the listener away from the video, but it isn’t required to enjoy his music. This is a veteran who obviously knows his aim and how far it can reach. And he reaches for a wider audience on this one, making it the slightly better of the two tracks for my taste. These could serve a good prelude to the next full-length album, as well as stand on their own two feet as singles in the Robert Caruso catalog. It is recommended as his latest work should be, but it’s also worth looking into “Three Minutes To Midnight” for more of this artist.