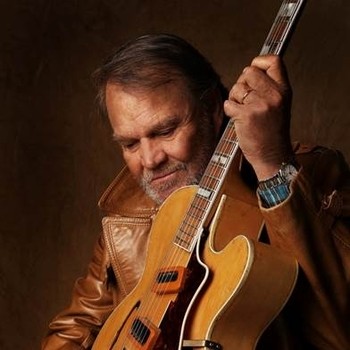 Glen Campbell’s remarkable life story – the real-life rags-to-riches tale of a boy who grew up as one of 12 children to poor Arkansas sharecroppers in the ’30s and went on to become one of the most revered singers and guitarists in popular music – is told in his just released song, “Arkansas Farmboy.” The track, which premiered via NPR Music who declared, “the golden voice, Campbell’s greatest musical attribute, remains: His singing communicates pathos and grace in equal measure,” is from Campbell’s forthcoming farewell album, Adiόs, out this Friday, June 9 on UMe. The song was written by Campbell’s former bandmate and lifelong friend Carl Jackson who produced the new collection. “I wrote ‘Arkansas Farmboy’ sometime in the mid- to late-’70s on a plane bound for one of the many overseas destinations I played with Glen between 1972 and 1984,” says Jackson. “It was inspired by a story that Glen told me about his grandpa teaching him ‘In The Pines’ on a $5 Sears & Roebuck guitar when he was only a boy. That guitar led to worldwide fame and fortune, far beyond what even some in his family could comprehend. It sends chills all over me now to hear him sing in first person the words I penned about him all those years ago.”