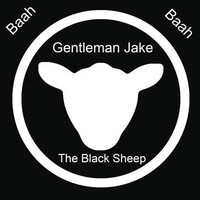 Only one other place where the lyrics of “One for the money, two for the show” came into play and that was with Las Vegas metal rock stars Escape The Fate with their track “One For The Money”. Except their song lyrics for that track go along the lines of

“‘Cause it’s one, it’s one, one for the money Two, it’s two got too much for the show Three, it’s three, three get ready Are you ready motherfuckers? Are you ready? Let’s go!”

Whereas with “The Fossil Blues”, by Gentleman Jake, his lyrical context go more like this “One for the money, two for the show, and three for the blood you’ll bleed”.

While the lyrics are similar in a way, their contents a lot different from one another than comparison to one another. In any case though, Gentleman Jake’s “The Fossil Blues”, comes off his latest and newest album “The Black Sheep”.

Which is an album consisting of 12-tracks that are of assorted proportions, in regards to the genre choices, ranging from alternative, rock, dance music, r&b, jazz, to just being straight out impossible to place. That is what Gentleman Jake does when it comes to his craftiness as far as music and him as a person. He is able to take something as simple as music, crafting it together to create something so out of this world, that it just sticks.

So much sticking in fact, that “The Black Sheep”, album consists of those 12-tracks noted beforehand, allowing for such a variety of tunes to pick and chose from it becomes harder and harder with each listen through to pick out. But if there had to be some to chose from it would likely be such songs as the one mentioned above called “The Fossil Blues”, as well as others like “Baby’s In The Backseat”, “Vacation”, “Maybe At Breakfast”, and “I Kiss You Everywhere”.

These song selections alone, are what really set up what this album provides. There is constant use of alternative, mixed in with some well rounded rock influences with some jazz inspirations thrown atop it all, to make the music really pop and stick to the lyrics, instrumentals, and vocal chords being portrayed.

As such, Gentleman Jake’s style is rather unique and interesting, and as said may be impossible to place but that just makes his music more fun and interesting to the ear. His style brings to mind the era of the 70’s crosses the 80’s time frames. It brings out this formula of music that just screams out those time periods, which were on their own of course, quite fun, entertaining, and joyful amounts of times.

His lyrical context that is used throughout this album, are done rather well. A lot of the material sung in these song selections as well as the rest of the album, is done in a manner that has you as the listener, become at ease with yourself. You find that you end up relating to a lot of the content discussed if not just surprised at what is being sung by Gentleman Jake as a person.

When it comes down to it all though, Gentleman Jake’s “The Black Sheep”, is one of those characters you won’t forget, let alone want to miss out on experiencing. For his music as a whole is plain right fun and just impossible to point out, for it needs to be heard than discussed.