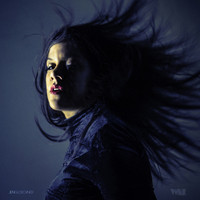 Jen Gloeckner’s latest album “Vine” consists of 11-tracks a few of which have been making Jen quite noticeable. In fact, “Ginger Ale”, “Breathe”, are said tracks and these tracks alone really set up what this album ends up becoming, which is a solid piece of work.

That being said “Vine”, is filled with such genres ranging from alternative, experimental, trip hop, and even some ambient thrown in for good measure. How this all plays out though, has it sounding gloomy yet filled with constant doom! It’s like each of the tracks has this persistence that keeps the music moving throughout the entire album. The tracks previously mentioned like “Ginger Ale”, and “Breathe”, are the glimpses into what this release really has in-store for it.

Other tracks like “Firefly (War Dance)”, for example is filled with pure music because it’s all you hear during its play time. Whereas other tracks like “Colors”, “Row With The Flow”, and “Blowing Through”, keep the gloomy vibe alive and well with those soothing vocal chords that keeps the music at ease with itself. The instrumentals used throughout this release are done rather well. Each of the instruments used plays itself accordingly well, that it has all the others working together to keep it all in tune with one another. Allowing for the vocal chords to come in every so often if not at all time, to do their own thing still maintaining that same doom yet gloomy effect and effort.

Jen Gloeckner’s “Vine”, release brings to mind that of another artists who performs in a similar fashion and or style her name is Nostalghia. Her style is a lot like Jen’s style, they both have such an interesting yet unique vocal tone that it makes the rest of the music in the backdrop just be more exposed than it should, making it sound more effective to the ear.

“Vine”, is a solid piece of effort that is brand new just released this year, so it is fairly new just as Jen is to the music scene. While she may have been around for some time, her music is barely just getting the kicks out of it, for all those out there to hear it. She has a mind set and the skills to follow through on it, ready to go. Her music is crafty, fun, and edgy at times, yet keeps the gloomy yet doom feeling steady and on top of the music being portrayed outward.

Jen Cloeckner as an artist one of those acts you can say is an up-and-comers because she is one of those, but one that you can expect to see pop up more than just once or twice. She is able to do more than just once, because of her abilities as an artist and definitely a musician. She has an attitude of flare and determination that keeps her music so fulfilled with emotion and energy that it will last for many more years to come, if not more so than just that. It just takes Jen’s hands and sense of mind to get the artistic side of her up and running with the music she is pulsing out.