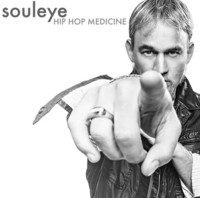 Souleye’s musical career began in the trunk of a car. The rapper, hip-hop artist and songwriter was on his way to a party in pastoral New England hill country in a car so laden down with his friends that he and another teen hopped in the trunk. The year was 1996, and Souleye was still Mario Treadway, a high school kid and basketball player who had spent his entire life in the New England backwoods around Sturbridge, MA.

Jump ahead to 2017 and see that Souleye hasn’t let up on the mission one bit, and “Hip Hop Medicine” does the biz with moxie. This track goes a few places besides everywhere, with my ear-beam immediately picking up on his sample of Yarbrough and Peoples “Don’t Stop The Music” a pretty big hit from way back in 1981. On that alone it had me interested and pretty soon I was tapping my toe. And that is always the mark of a good tune. If you know the old song sampled on this, you know it like the back or your hand. Otherwise, I am quite sure it takes knowing your music or being old enough to have bought that record. The neat thing here is reviewing something that brings you that far back without even blinking. It doesn’t even play the whole title, it’s just the “don’t you stop it” prefix but it still stands out like a sore thumb, but in a good way. And that much already from one who’s not all that hip hop driven. However, I am soul driven and can identify with any classic like the one driving this gem. The rapping is so tight and precise, the guy can’t lose. I’m feeling a hit all over this but I’m not the demographic to make that call. It serves up the hip hoppers with relish though. I guess this means he works it out and works it out well.

To be for real, music is medicine and enough people know that to relate without even thinking about it. I always like a danceable tune, and this is simply popping with groove combos between the sample and the rap over the extended bass line. This is not just rap and hip hop, it’s funk and soul, R&B and other forms of these genres that are much too often jammed together and sometimes even made new words out of. But let’s just say this were for my age group/demographic. I’d be all over it in a heartbeat, because it pulsates with a classic old school and modern balance that compliments instead of contrasting. I would have it riding the playlist until the rubber comes off the wheels. It’s not every day that I hear hip hop and don’t have to evaluate it from the get go, but Souleye has obviously never taken the eye off the proverbial ball, either that or he’s surrounded by the right influences to catch my attention on this one track. I’m glad I heard this, because he’s been around for 20 years, so there must be so much more to get into. This is how something new contains something old and gets you right into who’s slinging it, only to learn he’s no new kid on the block. The tempo changes are spot on and never out of place, and the beats snap like yummy salt beans. There is no denying this is killer, when heard by anyone, let alone follow Souleye.

I’m also not a singles guy much, but as an old-school collector I see the appeal for it these days, especially in any kind of dance realm. I’d still like to hear an entire album of Souleye at this very stage in the game. But I will definitely be diving backward into the catalog after leaving this on extended repeat. It brings a longing for more of the artist, so apparently, this was a great way to start with someone I’ve never even heard before, but obviously have keen enough ears to nail the sample track which hit a direct soft spot, and twisted my nerves on that premise alone. I can’t find a flaw to be heard in this.